If you are talking technology it is becoming more and more difficult to skip China out of that discourse. Almost every other brand has its major hub situated in the Dragon’s territory. It is superficial to talk about technology in terms of smartphones and laptops alone. Hence, we take a detour from the usual domain and bring you the latest from Taiwanese company Silverstone Technology. They have added to their popular PSU lineup with the new DA1650. The company believes its USP will be the fully modular design which will be reflected in its utility.

Silverstone have carved their niche particularly well by offering a wide variety of PSU options. The DA1650 is not the first full modular PSU introduced in the market by Silverstone. It has its ET series going strong with three variants, the ET700/ET600/ET500. The numbers in the codename denote the wattage of the PSUs and it is a no brainer that DA1650 is at the peak of Silverstone’s line. This extreme wattage work capacity hands a unique advantage to the Silverstone DA1650. Fanless functioning up to 495W, which is around 30% of its power is a feature worth appreciating. A single +12 V rail design is supported by a gargantuan 137.5 A rail.  Along with DC-to-DC switching, it is particularly smooth on basics like PFC and common protection against over/under voltage. 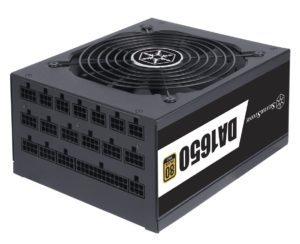 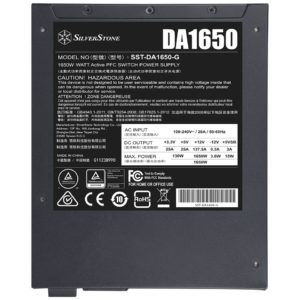 The list of certification with the new PSU includes those from ETA A and Lambda S+. The Silverstone DA1650 promises 80 Plus Gold Efficiency, also observed on ST-1500GS, ET600-MG etc. The PSU is a workhorse with 24/7 capacity in ambient temperatures of 50°C. Well equipped with a fluid-dynamic fan to keep the temperatures in the amiable range. Silverstone will price the DA1650 around USD $330.