And just a few days before its official unveiling

And a day later the company announced on Weibo that it would be unveiling its X7 series smartphones in China on September 1 on local time. The line-up will consist of the X7 and the X7 Pro models. The company shared a poster which reveals a few key details. The line-up will come with a 120Hz AMOLED display and 5G capabilities. This will be the first time Realme is using a 120Hz AMOLED display as they previously used 120Hz LCD panels.

As of today, we are just a few days away from the launch where we will no doubt get to learn everything about the smartphone. But we are an impatient bunch, and so we were excited to find out that the specs and price of the Realme X7 Pro had leaked. 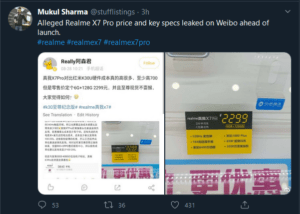 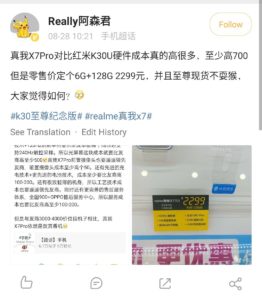 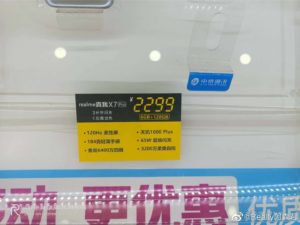 Prominent leaker Mukul Sharma has posted pictures on Twitter which reveal specifications on Twitter. According to the picture, the phone is going to have a 6.4-inch Super AMOLED screen with an FHD+ resolution of 2400 x 1080. The device is going to be powered by the Snapdragon 720G. It will come in with either 6GB or 8GB of RAM and 128GB of storage.

The phone will have a quad-camera setup with a 64MP Sony IMX682 main sensor, 8MP ultra-wide, 2MP monochrome portrait and a 2MP macro sensor. It will have a 32MP selfie camera in the front. It is going to have dual stereo speakers. It will have a 4,500mAh battery and support for 65W fast-charging.