When we all thought the seven deadly sins was ending the demon king didn’t lose they’re but instead took over Zeldris’s body. In the previous chapter, Zeldris was able to defeat the demon king from inside and was separated from his body. Happy ending…. No, the demon king now took over the entire land to be his body and is now standing a few stories tall in front of our heroes.

With no one’s body to become his vessel, Demon King made a final act of desperation by making the commandments being absorbed by the surrounding land. In the attempt, a gigantic body of earth materials became live. 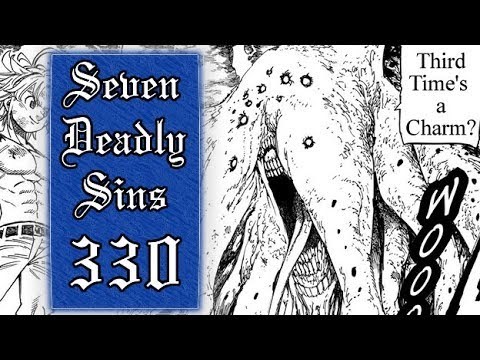 With the next chapter around the corner, Nanatsu No Taizai Chapter 331 spoilers, raw scans are out. According to the spoilers, we might see the defeat of Demon King in the chapter.

Nanatsu No Taizai 331: This world is not big enough for both of us

The chapter begins with the Seven Deadly Sins approaching at full speed towards the Demon King, while Meliodas says: “With all the power I have. This time … I will defeat you !!”

Zeldris and Gelda observe the situation, while Elizabeth, with both hands together, asks her friends to be victorious.

Then, the Demon King attacks the Seven Deadly Sins, who are trapped in a black ball with great gravity inside.

Demon King: “They will die crushed …”

Demon King: “Do not believe that a simple ant can face a mountain”

At that moment, Merlin conjures a spell, while Escanor prepares for his attack.

Escanor’s attack had no effect on the Demon King, who tells him: “Ha … It didn’t work. A God-like me can’t feel any pain or fear.”

While the Demon King continues to give a speech that nothing can defeat him, Merlin ends up conjuring his spell, then getting rid of the black ball that had trapped the entire group of capital sins.

Diane is surprised by the amount of magic that now runs through her body, while the Demon King, who is angry, tells Merlin: “Belialuin! Not only did you deceive the gods, but this time …”

Then, the attack begins.Together they launch their best techniques towards the Demon King, who responds to the attack with a black ball.

However, the Demon King’s technique was undone by the combined power of the Seven Deadly Sins. Then, the Demon King says: “My children … are killing their father. Aahh!”

Zeldris tries to say something, but Meliodas jumps at high speed to stop the attack that was sent towards his father.

Demon King: “You have lived your life in a stupid way !!!” – He says it while attacking Meliodas.

Meliodas’s body begins to disintegrate, but the Demon King realizes he was only a clone. Then, Meliodas, who is holding the ball of power sent for capital sins, appears above and tells his father that this time he will kill him without any regrets.

Meliodas launches a final attack, and then says: “Goodbye, father!”

Finally, the Demon King is defeated. But at that moment, Meliodas enters a mental world (apparently) and finds himself face to face with his father.

Demon King: “… You will regret doing this, Meliodas …”

Demon King: “The era of light and darkness will end and then begin …”

Text: “The order of darkness falls like dew. Here ends the Holy War!”