Alongside smartphones with mindblowing features, Samsung has been working on Tablets for a long time. Samsung Tab 3 and Tab 4 were among the first tablets from the brand to receive a massive number of buyers. Ahead of the flagship Samsung Galaxy Tab S7 and S7+ release, both the devices have appeared on Google Play console listing and on the website of the Indonesian telecommunication.

An Indian tech enthusiast tweeted two important posts about the Galaxy Tab S7 and S7+. The Google Play console listing post conveys that both the Tablets will support Google Play and every eligible app the platform holds. Additionally, another post reveals the brand’s support and certification of the Tab S7 and S7+ in Indonesia. 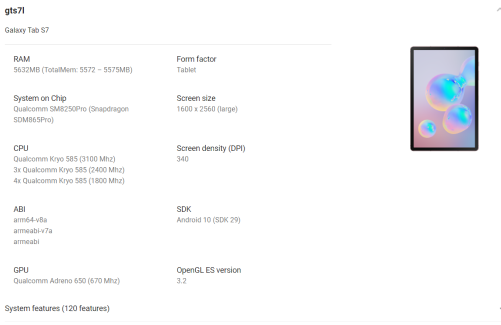 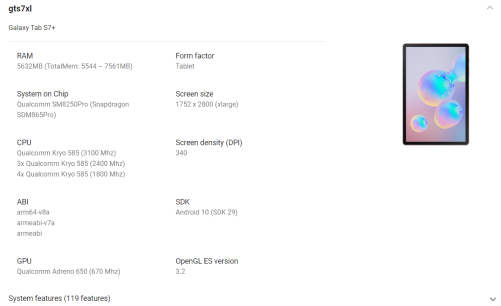 The console listing reveals Qualcomm processor with a flagship chipset. The Galaxy Tab S7 and S7+ will be powered by nothing but the best- Snapdragon 865+ chipset. With the Adreno 650 GPU combination, users will experience the smoothest performance.

The Play listing does not fail to mention the resolution, users will get with Tab S7/ S7+, which is 1600 x 2560 and 1752 x 2800 pixels respectively. Another important information revealed in the listing is that both these Tablets will boot on the Android 10 OS out-of-the-box. The available RAM variants would be 6 GB and 8 GB RAM.

Samsung is a popular South Korean company and Indonesia is one of the countries whose users eagerly wait for Samsung devices. On an Indonesian Telecommunications website, Samsung Galaxy Tab S7 and S7+ have been listed. Check out the captured images from the posted tweet.

It has been revealed that both these Tablets will flex SUPER AMOLED display which is quite expected. Leaked images flex thin bezels and a revamped S pen which excites many. Some sources state that the display dimension of S7+ or maybe both the tablets would be 12.4 inches. Above all, the in-display fingerprint scanner is another cool feature these Tablets will pack.

We post related content and exciting updates every day, so stay tuned! Also, share this article with all those who are waiting for the release of Galaxy Tab S7 and S7+!