Device most likely to be OnePlus 8T

Geekbench ratings have always been a curious phase before a smartphone release. The best part is absolutely going insane over guessing which smartphone has appeared in Geekbench listing after the core results are out. A new device from OnePlus has been spotted on Geekbench. There is a high probability of the device being OnePlus 8T.

With the launch of the OnePlus 8 series a couple of months ago and the Nord release two days back, the brand has stolen every bit of “news talk” globally. With the long-lasting wait for OnePlus 8T, an unidentified device has appeared on Geekbench with the model name OnePlus KB2001.

Take a look at the Geekbench scores below. The scores image was first released by a media site Nashville Chatter, sparking dozens of rumors and guesses. 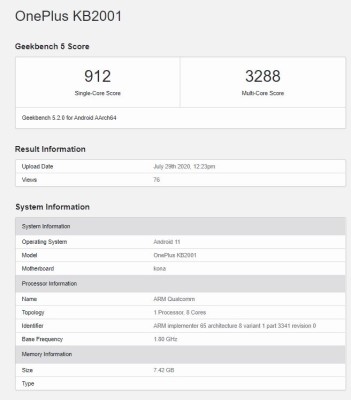 The processor information provided conveys that this OnePlus device will be powered by Snapdragon 865 chipset. Recently, ASUS has launched the ROG Phone 3 with Snapdragon 865+ chipset. Assuming the device to be OnePlus 8T, users are highly expecting it to come with 865+ chipset too, keeping in mind the previous works of the brand.

But as the chipset of the previously released devices in OnePlus series is sustained, you can expect an upgrade in the battery, camera, and other interesting features. Above all, the mysterious OnePlus device will release with an 8 GB RAM as the base variant.

We post interesting news and exciting updates every day, so stay tuned! Also, share this article with all the OnePlus lovers!