The new Ryzen 5000 series processors from AMD have quickly become the new talk of the town. There are four SKUs under the 5000X bracket and Ryzen 5900X and Ryzen 5950X are at the top end of it. More and more performance stats continue to emerge as AMD continues the distribution of new Ryzen 5000 CPU’s review units. AMD’s Ryzen 5000 APUs derive confidence from the new Zen3 architecture  Cezanne. Geekbench tests are often utilized to gauge the ability of new arrivals in CPU processors space. The top end offerings, Ryzen 5900X and Ryzen 5950X were recently put through the Geekbench tests. Read along to find out the scores.

It is not an easy task to build your reputation as a reliable leaker of various tech occurrences. However, Twitter user APISAK has surely won the trust of many by posting timely leaks. APISAK in his latest tweet posted the results of Ryzen 5950X Geekbench scores. The single and multi-core processors performed exceedingly well. The Ryzen 5900X single-core was particularly impressive and managed to cling onto the superior Ryzen 5950X. However, in the multi-core test, figures like 12869 and 13605 speak of the difference. 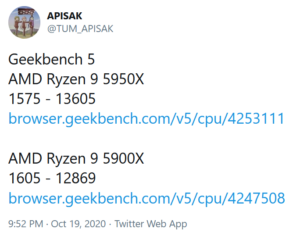 As we move from Vermeer to Renoir the cost also goes uphill. Well, you shouldn’t complain when you are getting 16-core and a 32 thread processor. The enhanced GPU CUs on the Ryzen 5950X will also help it fare better.