Xiaomi is all set to launch Redmi Note 9 Pro 5G in China. But features of this device have been leaked online and all over the internet. 140 million units of the Note series have been sold globally and there is a huge expectation from the Note 9 series which is expected to be released in three days. But amidst the release of new devices, developers haven’t forgotten to work on new things for the already existing users!

No one has forgotten the 8th edition of the Note series, Redmi Note 8. If you are a Redmi Note 8 or Note 8 Pro user, this is the perfect and most exciting piece of news- Both the devices will be on the first batch to receive the Android 11 stable update.

Android 11 OS internal testing has officially begun for Redmi Note 8 and 8 Pro. We can soon expect a public beta or stable update roll-out date from the officials. This long-awaited announcement was posted on the Telegram page of Xiaomi. Here is the screenshot of the message- 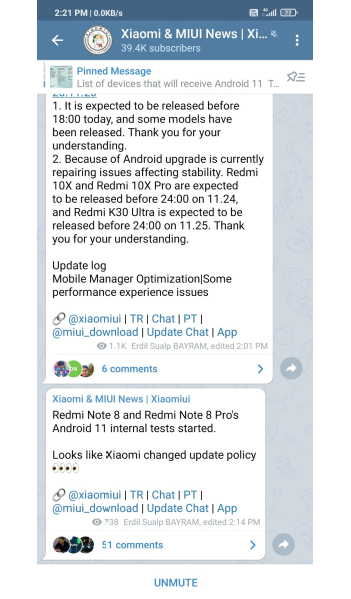 Both Redmi Note 8 and Note 8 Pro were launched in 2019 with Android 9 OS out-of-the-box. Both the devices received the Android 10 update at a reasonable month of 2020. But Android 11 update testing was not planned for these devices, which created users to wonder how long it would take for them to receive the stable build.

But now, we know that the wait will end shorter than expected because the testing has begun already. Google Pixel users are already enjoying the Android 11 experience. But this time of every year has been confusing and intriguing for people who have chosen other brands, as they wait for a new OS updagte announcement!