Dimensity 720 and 8GB of RAM confirmed

Ever since Realme entered the market in 2018 to compete with Xiaomi’s Redmi, it has not been shy about launching new phones or new series of phones. A popular joke/complaint among the Realme community has been that Realme launches too many phones. But that has not stopped the brand from pumping out new smartphones and the V5 series is the latest member.

The first smartphone in the series, the Realme V5 is set to launch on August 3, 2020, in China. We already know a lot about the design of the phones, since the company has already posted a teaser on Weibo. The video revealed that the phone would have a rectangular camera module, inside of which the cameras would be placed in an L-shaped quad camera setup.

TENNA listings of the device (RMX2111 and RMX2112) were also spotted. The images of the smartphones in these listings was identical to the design of the V5. According to these listings, the V5 will have a hole-punch display with the hole-punch located at the top left of the screen. As for the specs, the device seems to be packing a punch. It will have a 6.5-inch display with the resolution of 1080 x 2400. It will be powered either by the 2GHz octa-core MediaTek Dimensity 800 or the Dimensity 720 processor with up to 8GB of RAM and up to 256 GB of storage. All of this will be powered by a 4900mAh cell.

And according to a tweet by Twitter user @stufflistings, a Geekbench listing has confirmed the Dimensity 720 processor and an 8GB variant. As we can see in the Geekbench image, the model is listed as Realme RMX2111. It pulls off a 2493 score in the single-core test and a 6555 score in the multi-core test. It will run Android 10 out of the box. None of this information has been officially confirmed yet. 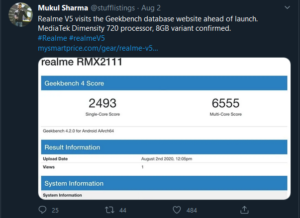 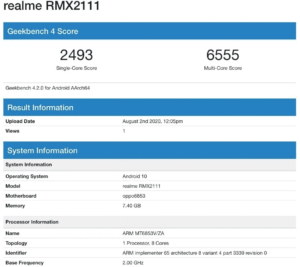