Claims have been made about Realme ready to launch two more devices, rumored to belong to Realme 7 series.

“There can never be enough smartphones in the market today.” If you’re looking for the wise man that said those words, look no more, you are reading his post. Funny side aside, it really is true. There’s just so many of them out there, at every price point. To many like us, at DigiStatement, it is a matter of sheer delight. To many consumers though it might become a pain. Xiaomi has championed the cause of adding to people’s misery and delight alike, in this manner. The Realme outlet also has boomed since its inception with multiple offerings. If the Tweets of a certain tech enthusiast named Rudhra Nandu are to be trusted Realme is ready to bring two new devices to the market. The straight source of this information is Digital Chat Station.

Is this really the Realme 7 series?

There were speculations about Realme being on the verge of releasing the successors to Realme 6 series. There isn’t a lot released about the two devices. At first glance, they don’t seem apt under the Realme 7 brand. The battery life of these two devices has been estimated to be 4300mAh+65W and 4500mAh+65W, respectively. Digital Chat Station mentions the latter device as a flagship. Well, it would be interesting to see exactly where does this “flagship” fit if it isn’t of the Realme 7 family. Some sources claim that the pandemic has hit the production and distribution efficiency of the market. Realme’s plan to launch the lineup of its new devices seem to have taken a setback from this. Among a few, one sure USP of these devices is to be their lightweight, if as per claims, that of under 200g. 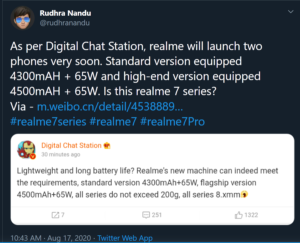 Twitter is full of skepticism and there was enough of it when Rudhra Nandu posted about the two new devices. As of today, Realme 6 Pro with 6 GB RAM and 128GB internal storage is priced at 18,999 on Flipkart. To release a phone with 4500mAh battery with 65W Flash Charge technology seems too far fetched an idea under 20k to most. The Realme 6 Pro has 64 megapixels, quad-camera setup, and a superior full HD+ screen with a very impressive 90Hz refresh rate. We can’t say that we doubt Realme and there claims. The brand has proven its mettle in the budget-range and we shouldn’t be surprised if the 7 series is priced aggressively as well.