About Tom Clancy’s Rainbow Six Siege: Rainbow Six Siege is an online tactic based first-person shooter video game. The game is developed by Ubisoft Montreal and published by Ubisoft. It was released worldwide for Microsoft Windows, PlayStation 4, and Xbox One on December 1, 2015

Well, the Ubisoft team recognized this issue officially. The official Twitter account of Ubisoft Support posted an update and mentioned about the issue that is affecting connectivity issue in Rainbow Six Siege.

Ubisoft also stated that the developer team is working towards resolving the ongoing connectivity issue. Well, in the meantime, the players can do nothing but wait for an update to resolve the issue. 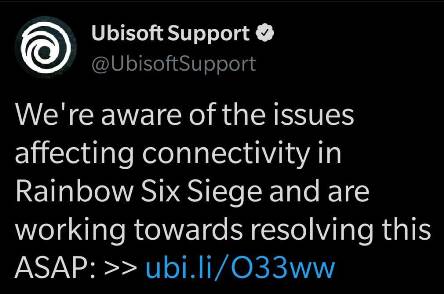 Stay tuned, as we will be updating this space with the latest update.