PlayStation 5 or PS5 is a video game console made by Sony Interactive Entertainment. PS5 was announced in the year 2019 and it is a successor to PlayStation 4. PS5 was released on 12th November 2020 in Australia, Japan, New Zealand, North America, Singapore and South Korea and a week later, it was released worldwide. PlayStation 5 is a part of the ninth generation of video game consoles. PS5 was released in two variants – base model with an Ultra HD Blu-ray-compatible optimal disk drive and a Digital Edition as a lower-cost model if you prefer to purchase games through digital download. 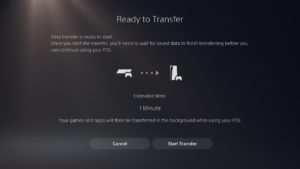 But recently users have complained about an issue with the data transfer of PS4 to PS5. Users said that the data transfer feature of PS5 is not working. Users have tried ethernet multiple times without the cable and Wi-Fi. The process starts where users can select what they want to transfer and the process starts the preparation but eventually comes with an error. A user said that he tried to transfer Rainbow Six Siege with ethernet. It took a couple of hours for the transfer and within 10 minutes of the transfer being complete, he got a message which said that the transfer failed. Another user facing the same type of issue said that the total flagged transfer size was 82GB and there were frequent transfer errors in around 80GB. If you are experiencing the same type of issue in your PS5, you can follow these steps to fix the issue by yourself –

PS5 data transfer was cancelled : Here's how to fix it