PlayStation 5 or PS5 is a popular video game console developed by Sony Interactive Entertainment. It was announced in 2019 as a successor to PlayStation 4 and released on 12th November 2020 in Australia, Japan, New Zealand, North America, Singapore and South Korea. It is a part of the ninth generation of video game consoles. PlayStation 5 has received decent feedback with praise towards the DualSense controller’s improved haptic feedback and adaptive triggers. A few reviewers found the console’s design polarizing and technical reviews said that features like the variable refresh rate and the 8K video output mode was not present at the launch.

Initially, PlayStation 5 was in limited supply when it was launched. This thing was taken as an advantage by many who tried to sell the console for thousands of dollars. Sony later declared the launch of PlayStation 5 as the largest launch in the history of PlayStation surpassing 2.1 million units of PS4 in the first two weeks in 2013. PlayStation 5 has been the best-selling video game console sold in the month of November in UK. It sold around 43,000 units in the first week of release in Spain. Sony has reported a total sale of 4.5 million units of PS5 through the fiscal quarter ending on 31st December 2020. 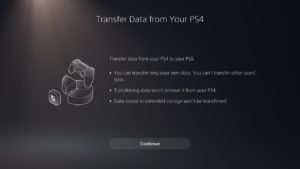 But on the other side, users have came up with various complaints related to PlayStation 5. Users have recently complained that the data transfer process from PS4 to PS5 was cancelled in between. A user said that his router decided to restart when he was doing data transfer and it cancelled the transfer from PS4 to PS5 and he was not able to see the games anymore on the PS5 to choose to bring over. Another user said that when he was transferring data from PS4 to PS5, his PS4 was stuck at “transferring……” and then suddenly it got cancelled. Some said that the transfer was running in excess of several hours over Wi-Fi and when they went back and checked it, the transfer got cancelled. If you are facing the same issue on your PS5, you can follow these steps to fix the issue by yourself –