Pokemon GO players are fighting the Team GO Rocket Grunts for several months now, but Shadow Legendary Pokemon continues to be rare. However, players can now look ahead to saving the powerful Psychic-type Pokemon, Mewtwo, from Team GO Rocket’s grasps.

Players who will log in to Pokemon GO right now, they will be able to find “An Inter-egg-sting Development” on the Special tab of their Field Research menu. An all-new set of event bonuses are also into effect, which will allow players to easily finish this new Special Research by taking advantage of perks like enhanced Team GO Rocket balloon spawns.

The latest Special Research, “An Inter-egg-sting Development,” is split up into six stages. Players are tasked with finishing a series of challenges connected to Team GO Rocket and hatching shadow eggs, with the rewards eventually leading to a precious Shadow Mewtwo.

You can check all the six stages tasks and rewards down below. 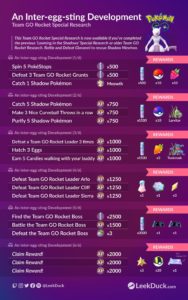