Yesterday, Riot Games has given us a brief look into this season’s League of Legends ranked rewards, including Victorious Lucian, loot capsules, and more. The current ranked season will finish on November 10 at 07:59 GMT. The ranked rewards will later be issued within two weeks to all players that have unlocked ranked rewards throughout the year.

Victorious Lucian is arriving in LoL

The most highly-anticipated reward is, this year’s Victorious skin, which is granted to every player who has been able to reach gold rank or higher. Every year, Riot releases a new skin to the Victorious line, and this year, Lucian is receiving that honor. Riot teased the skin back in September, and many fans immediately forecasted that the teased skin is for Lucian. 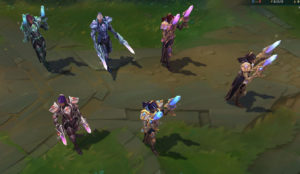 As new rewards, players will get chromas for the skin depending on the ranks. One chroma will be granted for each rank a player has reached above gold. The chromas range from platinum through to the challenger, giving the skins a wide range of unique in-game looks. Everyone who completed ranked placements in solo queue, flex queue or both will be able to receive an Eternals Lucian Series 1 Permanent, a ranked profile icon, and also, a ranked profile banner.

Apart from the Victorious skin, players can also look ahead to Clash and honor rewards this year.

As per usual, this year’s honor rewards will depend upon the honor rank each player has achieved. The greater the honor rank, the better rewards. Every player will be awarded an honor capsule that is bound to its final honor level. Holding an honor level below level 3 will not be able to get any rewards.