Google is expected to release Android 11 stable update for the latest Pixel devices on or after September 8, 2020. When it comes to software, Pixel devices rock the stock Android framework which has made its devices one of the most liked in the world. Then comes OnePlus, which packs OxygenOS based on Android software. OxygenOS is the best custom skin from a brand that cuts out advertisements, unwanted apps, and even bloatware, making OnePlus devices the cleanest and smoothest devices.

The upcoming version of OnePlus’ custom OS is the OxygenOS 11. The fans have been ridiculously excited as the OxygenOS 11 will be supporting Android 11, the most anticipated release of the year. We finally have the timeline of OnePlus devices which will be receiving OxygenOS 11. Here are the dates and other details.

A popular tech source called TechDroider tweeted the official release details of the OxygenOS 11. Behold fellows, as the most awaited OxygenOS 11 is all set to officially release in mid-October 2020! The public Beta will be out even earlier, which is on September 8, 2020. 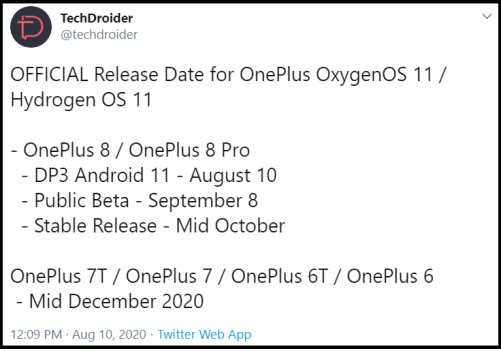 OnePlus 8 and 8 Pro will be the first devices to receive OxygenOS 11 update. So, users can look forward to the update in the mid of October 2020. But this also hints that the OnePlus 8T, which is yet to be released will most likely be launched with OxygenOS 11 out-of-the-box.

OnePlus 7/ 7T and OnePlus 6/ 6T will receive the OxygenOS 11 update in December 2020. So by 2021, OnePlus devices will rock the Android 11 OS on time as promised by the Chinese tech giant.

But this post raised the most important question, which is the update status of the latest release- OnePlus Nord. The budget flagship device that recently swept the market hasn’t been mentioned anywhere in the timeline. Hence, the post ended up creating a platform where the Nord users assembled to sort their confusion out.

The most interesting features OxygenOS 11 will bring are the Always-On display and system-wide dark mode. Nord users are still waiting for any bit of information about OxygenOS 11 for OnePlus Nord. We hope the officials soon address these eagerly waiting users.