Note: New updates are being added at the bottom.

Original post; The Chinese smartphone manufacturer Oppo launched Oppo F11 and F11 Pro a few months ago. The phones are feature-packed and offer decent specs to price ratio. Initially, the smartphones were launched with Android 9, after that both the phones received a few bug fixes and other security updates, but neither of them has received any major OS update. Now the users are asking when Android 10 update will arrive for Oppo F11, F11 Pro.

Many Oppo F11 and F11 Pro owners are wondering will Android 10 updates arrive on their phones or not. Some users tweet every day asking Oppo about Android 10 on Oppo F11, F11 Pro. 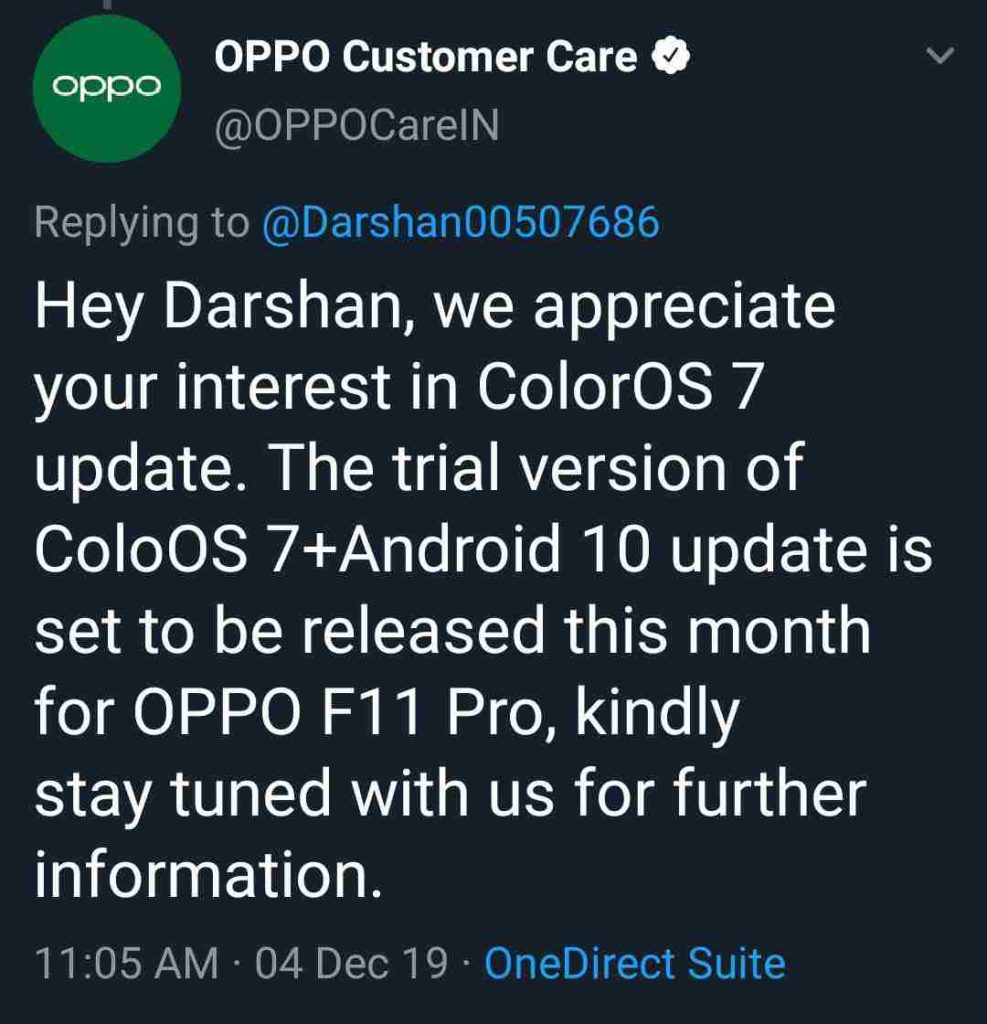 We suggest you look for the Android 10 update for Oppo F11, F11 Pro on the official Oppo website –here.

Note: We will update the post when any news about the Oppo F11 Pro Android 10 update arrives, So stay tuned. Also, share this story on Twitter, tagging Oppo twitter handle, so they may listen to the users as soon as possible.

The beta version of Android 10 update Oppo F11/F11 pro is rolled for many users but the stable version in the released yet.

Hi, the current batch for OPPO F11 Pro ColorOS 7 + Android 10 update is full. You can wait for the second batch. We'll announce once it is released.

Hey Dipankar, its exact release date is not confirmed as of now. You will get the notification as soon as the second batch is available for OPPO F11 Pro.

Finally, ColorOS7 + Android10 trial version for F11 Pro in India is available NOW！ 0/10,000 quotas are waiting for you in this batch! Act fast!

This is what you’ve been waiting for…..🇮🇳#Finally #ColorOS7 + #Android10 trial version for F11 Pro in India is available NOW！
0/10,000 quotas are waiting for you in this batch! Act fast!
How to apply 👉https://t.co/fhJ2kgQFby https://t.co/XCSjLUIvbY

Stable version of the update for Oppo F11 and F11 Pro is now rolling out. Well, the update will take time to reach all regions as OTA updates are rolled out in batches. Well, in the mean time you can check out the ColorOS 7 features you can accept on your phone.

[Smart Sidebar]
• Optimised user interfaces and improved one-handed operation.
• Drag an app out of Smart Sidebar to open it in Split-screen mode.
• Added two settings: Assistive Ball Opacity and Hide Assistive Ball on Fullscreen App.
• Optimised the Floating Window feature for more apps.
• Added a bubble: A bubble is displayed when you open an app in a floating window from the Smart Sidebar. Tap the bubble to collapse and open the app.

[Navigation Gestures 3.0]
• New gesture: Swipe inward from both sides of the screen and then hold to switch to the previous app.
• Optimised gestures: All gestures are supported in landscape mode.

[Home Screen]
• More live wallpapers.
• Added Art+ static wallpapers.
• Customise whether to open Global Search or the notification drawer when swiping down on the Home screen.
• Customise the size, shape, and style of app icons on the Home screen.
• Swipe up on the Lock screen to switch unlock methods.
• Optimised the graphic design of password unlocks to facilitate one-handed operations.
• Supported live wallpapers on the Lock screen.
• More screen-off clock styles.
• Added a simple Home screen mode, featuring larger fonts and icons and a clearer layout.

[Security]
• Connect your phone to Wi-Fi networks using a random MAC address to avoid targeted ads and protect your privacy.

[Tools]
• In Quick Settings or Smart Sidebar, you can open Calculator in a floating
• Added the trim feature in Recordings.
• Added the Weather (dynamic) ringtone, which automatically adapts to the current weather.
• Added weather-adaptive animations in Weather.

[Photos]
• Optimised the Album UI for a clear hierarchy and quick lookup of photos.
• Added Album Recommendations that recognises more than 80 different scenes.

[Applications]
• Soloop Video Editor: Create your video with one tap.
• Added DocVault, an app for easy management and use of your digital ID cards (available only on phones sold in India).