OnePlus is readying a device to enter into the budget range of smartphone markets.

We wonder sometimes how empty would the tech market feel if we had a lack of news leakers in it. Fortunately, there’s plenty of good souls out there, their eyes and ears wide open to bring us what top brands are plotting behind the scenes. @Slashleaks on Twitter has a reputation for bringing the best and most interesting of these. The latest leak is from the OnePlus factory. The cross-platform processor benchmark, Geekbench happens to have retrieved data on a mysterious OnePlus device. The device is represented as OnePlus Clover and has decent specs from what has been revealed.

After OnePlus recently released the Hydrogen OS 11 for the developers most did not expect the arrival of a new device brewing. There have been rumours going around that OnePlus will soon add to its lineup by introducing OnePlus 9. There is little to be excited here about because the specs on the clover aren’t really that high-end. Geekbench reveals that it will run on Android 10 out of the box. Most sources believe that by the time OnePlus releases its 9 series, Android 11 would be a natural offering. The RAM on this device is shown to be 4 GB, and the processor is a mid-range 64-bit Snapdragon 660 octa-core processor. This is suggestive of OnePlus’ intention of targeting the budget range. 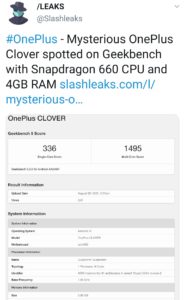 To be honest, this venture could prove a little counterproductive for OnePlus. They set the standards for their non-flagship devices quite high with the OnePlus Nord. A RAM of 4GB used to be a couple of years ago, nowadays its nothing to feel excited about. Given that even the lower end model of OnePlus Nord comes with 6GB of RAM, we can expect the Clover to be OnePlus’ cheapest offering. This seems like a move primarily to extend the customer base. Will the Clover be able to achieve its goal? We’d suggest you wait till the device leak drops and not to make up your mind yet.