NVIDIA drops one bomb of news and the web is all insane about it. Giving you a heads-up, the upcoming graphics rendering processor from NVIDIA is the NVIDIA RTX 30 series, a high-end processing unit. But the company is leaving hints about this series like Easter eggs and here’s all you need to know!

On the official NVIDIA site, the company released Ampere Architecture Whitepaper, containing all the important details about the upcoming RTX 30 series (refer images).

The upcoming RTX 30 series will be powered by NVIDIA Ampere architecture GA10x GPUs. The brand claims that these processors will provide record-breaking performance. Now getting back to the Whitepaper, there is a comparison chart, from GeForce RTX 2080 to RTX 3080 (image below).

On the right top corner, you can spot that the officials have specifically mentioned that the details in the table were about the GeForce RTX 3080 10GB variant. This piece of information was more than enough to confirm that we can expect multiple memory variants of the RTX 3080 graphics card.

The GeForce RTX 3080 graphics card launched a few hours ago but hold yourself back, as NVIDIA has plans to extend the variants. But also note that the memory difference is the only border separating both the version of RTX 3080, which is pretty obvious. 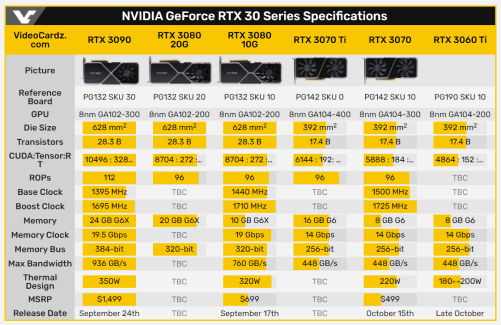 From one of the major sources, it is also known that the RTX 3090 will be officially released on the 24th of September 2020. Between all the hectic schedules, NVIDIA hasn’t officially announced a release date or even the product itself.