Clash Royale is an action-packed real-time strategy game developed and published by SuperCell. It has a lot of features to make your battlefield more interesting. But what if, during a clan war day, your teammate is just doing dead work and you might think this might lose you the war. What if there was a feature to tell him to get his stuff together? Well, there is certainly one feature called “Nudge”, that will help you to do that. Wondering what is Nudge? Don’t worry, we’ll tell you everything about the Nudge in Clash Royale.

Clash Royale is a tower-defense video game in which players compete in two- or four-player games to smash the most competing buildings, with the defeat of the “King’s Tower” resulting in an immediate victory. If all players/teams have an equal number of crowns or none at all after three minutes, the game continues into a two-minute overtime period, with the player who destroys an opposing tower winning instantly. If no towers are destroyed during overtime, a tiebreaker is used, in which all towers lose health rapidly and the tower with the least health is destroyed.

However, a draw occurs when two towers have the same fitness. After a late-2018 update, leaving a 2v2 match several times prevents the player from playing 2v2 with random players for an extended period of time.

Players are ranked in this game based on how many trophies they have. Players earn experience points by donating and upgrading cards, which they use to level up. Level 13 is the highest possible level. The December 2018 Update introduced Star Points for unnecessary experience and will grant Star points for previously leftover experience. 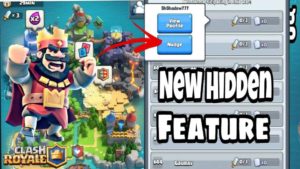 Clan leaders and co-leaders have access to this fantastic functionality called, Nudge. If a clan war day is nearing its end and you notice a clan member hasn’t completed all of his or her tasks, you can actually tell him/her to finish the activities immediately.

How to use it?

Well, if you’ve ever received a Nudge in Clan Wars and wondered what it meant, it’s a gentle reminder to get back on track and finish the unfinished business.