Xiaomi is a Chinese smartphone company that initially grew popular for the value-for-money mobiles. But the list of devices that Xiaomi is now into is never-ending. For instance, let’s just consider Xiaomi mobiles. And now, you’ve got Xiaomi earphones to rock along, with massive power banks. Then there are smartwatches to connect to your phones, and chargers, and cables/ adapters if you need to replace yours. Xiaomi indeed has taken a lot of interest in producing not just phones but everything you’ll need as accessories! 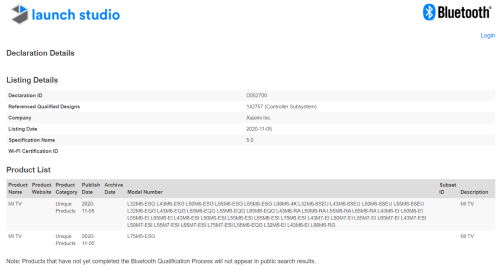 Without SIG certification, a gadget is not allowed to use the Bluetooth services or be released for public use. SIG Bluetooth certification is one of the final clearance an electronic gadget needs for release. So we can expect an official announcement of this Xiaomi television very soon.

The certification was released on the site on November 5, 2020, with Bluetooth v5.0 as the core specification. The hardware version number is listed as 1 and the software version is listed as 10. The model number of this unannounced Xiaomi television is L75M5-ESG. Here are some other details about the supported layers listed on site-