The update is rolling out in a phased manner

On August 12, Xiaomi held an online event to announce the rollout of MIUI 12 in India. During the event Xiaomi announced that the Mi 10, Redmi Note 9, Note 8, and Note 7 series will be updated to MIUI 12 in August. And looks like Xiaomi is sticking to their promise. Today, Mi India tweeted that MIUI 12 version V12.0.2.0 will be rolling out to Mi 10 users in India. This update will be rolled out in phases, so if you have a Mi 10 keep an eye out. 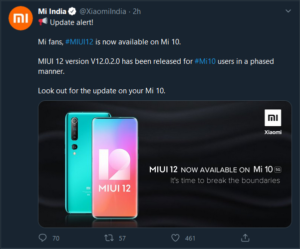 Xiaomi announced MIUI 12 back in May, just six months after the introduction of MIUI 12. The update first went live in China and was scheduled later for the rest of the world. Despite it being just six months since the release of MIUI 11, Xiaomi was still able to stuff MIUI 12 chock-full of new features.

The Mi 10 is Xiaomi’s attempt to break into the premium segment. While Xiaomi is the number one smartphone vendor in India, it mostly sells budget handsets. The Mi 10 has a 6.67-inch Super AMOLED screen with a resolution of 1080 x 2340. The screen supports HDR10+ and has a 90Hz refresh rate. Under the hood, it packs a Qualcomm Snapdragon 865 processor. It can be configured with up to 12GB of RAM and 256GB of UFS 3.0 storage. On the back it has a 108MP quad-camera setup.

Out of the box, it launched with MIUI based on Android 10. It is great to see Xiaomi updating the device quickly to MIUI 12. If Xiaomi wants to maintain the device’s premium image, they need to continue delivering quick and consistent software updates.