After releasing a major update for MIUI 12 for Mi 9T Pro in July, this new ROM will update the Security Patch.

Xiaomi has been boastful about its MIUI 12 update, ever since its arrival was announced. The Android 11 based OS update will bring a breath of fresh air to every device it plans to grace. The developers beta had initially been rolled out exclusively to Mi 10 series and little later to the Mi 9 series. Xiaomi is regarded as one of the finest service providers in the smartphone industry, especially in terms of their follow-up with updates. Doing no harm to their stature, Xiaomi has started rolling out the global stable ROM for Mi 9T Pro. Global distribution basically means, those of you owning the equivalent version, the K20 Pro won’t miss out.

Wondering what the difference between these devices is? Well, to be a little dramatic, these are basically identical twins that were separated and grew in different families. What I mean by that is, the branding on the back has Xiaomi on one and Mi on the other. Another minute difference is in the network band supported by the two. The Chine based Mi 9T Pro supports a few more than Redmi K20 Pro. On the genetics part, everything remains the same. Both are powered by the same Snapdragon 855 SoC. The triple camera setup on the rear with a 48 MP primary shooter and an impressive 8MP telephoto lens to enables capturing to the fullest. The built of the selfie camera, a 20MP, is pop-up inspired. Globally they are offered in three colour variants; carbon Black, Flame Red, Glacier Blue. See, identical twins indeed!

“Hei Mi 9T Pro users” read the message on Mi community website by an account named feds64, who came bearing the good news. Now, quite clearly this is a very minimalistic update, at least the changelog says so. It upgrades the Android Security Patch to July 2020 version, improving system security. Worry not if you missed out on the previous update that was to thank for major changes, we have you covered. There are various system animations that make bring life to your navigation experience through different sections of phone. Magazine-level layouts will structure the content in a more efficient manner. The spotlight will waver only on what deserves your attention. 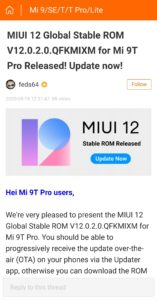 On the privacy and protection front, there are many appreciable newcomers. You receive notifications whenever apps record audio, use camera or access location. On the optimization front, one app will no more be able to launch other apps in the background. Also, third-party apps will have their access to the telephony, restricted. A few other changes have been made, keeping convenience in mind. A notification pulled down, can be converted into a floating window. The Mi AI has been made capable of attending calls on your behalf now. Your customised recording greetings will be played when this function is in use. Cosmetically, wallpapers can be displayed in a darker palette when your device switches to dark mode. So, now you know why all that buzz around the MIUI 12. For the Mi 9T Pro/Redmi K20 Pro reading this post, click on the links below to download the Global Stable ROM V12.0.2.0 rolled out for you.