Xiaomi is quickly following up with Global updates of MIUI 12 on latest and older devices alike.

by Akshay Tahiliani
in Uncategorized

It has been a busy month for Xiaomi who are working on launching the stable beta for their MIUI 12. The process is in its developer’s beta period for some devices and for some, it is almost complete and on the verge of a global ROM distribution. Earlier in August, Redmi 9A was officially announced as Xiaomi’s first device to come with MIUI 12 out-of-the-box. In terms of following the MIUI 12 update trend, Xiaomi began with its latest offerings the Mi 10 series. The Mi Mix 3 update also brings the August Security patch. Xiaomi have made these monthly security updates a fundamental part of their scheme now.

The Mi Mix 3 has been in the market since the very end of 2018. It is an apt example of Xiaomi’s diligence when it comes to Android and OS updates. Mi Mix came with Android 9, saw the MIUI 11 and Android 10 updates in 2019 and is now ready to welcome MIUI 12. The update version is numbered V12.0.1.0.QEEMIXM and has been rolled out globally. If you had installed the first wave of MIUI 12 update on yourMi Mix 3 or the developers beta then this will only eat up about 877 MB of space. In case not, then you are up for a revamp that will consume 2.2 GB. The changelog for the V12.0.1.0.QEEMIXM as expected is not a heavy-duty. 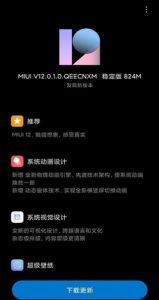 A few animations have been optimized and right and left cornered swipes open the control center and notification panel, respectively. The camera gets an enhanced mode to scan documents with minimum fuss.  The global ROM update is yet to be deemed stable, hence if you shall not receive the update, there is no need to be disappointed. Well, that’s me striking a formal talk which fails to work with the tech-savvy people. So, we have taken care of the ROM links (below) for those of you itching to explore the MIUI 12 updates on your Mi Mix 3.