The Hisense H8 is the younger sibling to H9 in their Quantum series.

The recent few months have been hugely dedicated to Android 11 and various smartphone OS based on the same. Among a streak of these, were updates from Xiaomi and OnePlus etc. Well, it is not just the smartphones that got smarter our television sets did too. So we think it’s important not to miss these floating Smart TV updates as well. This is to inform you on the latest update from Hisense stand. Their coveted H8 Quantum series is under focus in this post.

Hisense H8 and the new update

An introductory crash course first! Hisense is a China-based multinational white goods and electronics manufacturer. The Boomer generation remembers them for making endeared radio sets. Toshiba is one such popular brand name under which Hisense is known to manufacture its products. Hisense took their game to another level by acquainting us to the first-ever true 8K 10-bit HDR screen with an image quality engine claim, wait-for-it, an amusing 6.5T supercomputing power. Hisense H8 is known for its Quantum Dot technology that refines picture enhancement. With a motion rate of 240 comes in a native refresh rate of 120 Hz which is as good as some top-end Samsung 4K and 8K Televisions. The ULED display has been admired by most users. 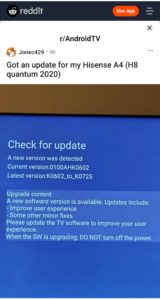 The changelog of this update would almost go unnoticed if it weren’t put up by a Reddit user who goes by the name of Jonec429. Minor bug fixes here and there and user experience improvement are the minimal upgrades that this package would provide. Hisense continues to provide premium visual experience at all price brackets, a proof of this was evident at CES 2020. The H8 is bettered by its Quantum family sibling H9, which edges past the former’s count of 700 nits to 1000 nits of peak brightness. OPPO is the latest smartphone manufacturer to enter into the smart TV segment after announcing its product in March 2020.