Loomian Legacy: How to get Radiant Goppies ?

Have you ever wanted to capture amazing creatures and bond with them and then battle with them? Then Loomian Legacy is for you. In this article, I will tell you about a Loomian called Goppie and How to get Radiant Goppies? Let’s just jump into it!

What is Loomian Legacy you ask? It is a Roblox game in which you capture, bond, nurture and then battle with your Loomians. Loomians are of different types having different forms and powers. All loomians are born with different types of powers like fire, water, grass etc. You can catch them in the wild and then raise them. Loomian Legacy is a series of Roblox games, which is currently in development by Llama Train Studios. The game(s) was released on July 20th, 2019. You can get a beginner Loomian and train it up to its final form. This is like Pokemon but in Roblox. 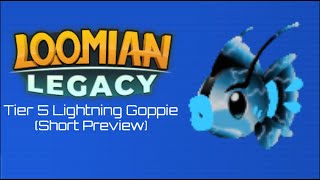 How to get Radiant Goppies?

Goppies come in different types and is one of the only Loomian that has a Radiant form as of yet. You can get the Radiant form (which is similar to a shiny in Pokemon). There are tiers of Goppies available to be fished. Radiant Goppie has a particle effect around the Goppie and can be seen very clearly. Only Tier 5 Goppies can have Radiant tag on them and not the tiers below 5. There is a 1 in 1561 chance of getting a tier 5. Have your Graphics turned up so you can see when you catch a Radiant Goppie? So the chance of getting a radiant is 1/24,976, and an alpha radiant is a 1/159,222

Hope this article helped and let’s get fishing.