Android 11 is finally here (Well, if you are a Pixel owner. The rest of us will probably have to wait a few more months). And just like Android 10, it is an iterative upgrade. That means that while it does not shake up a lot of things, it does contain some useful new features.

And one of the areas that have received improvements is notifications. Notifications from all the chat apps now get their own section called ‘Conversations.’ That ‘Chat Heads’ functionality you might have seen in Facebook Messenger, has now been implemented on the system level. That means it should be now easier for third-party developers to support this feature now.

Media controls have also been revamped and now reside in the Quick Settings panel instead of the notification section. One of the more noticeable changes is in the power menu. Now long pressing the power button will give you access to your smart home controls or any payment methods you might have saved to Google Pay.

Google has finally added a built-in screen recorder. It can be launched from the Quick Settings panel. You can also choose to record audio and screen touches along with the video. Privacy continues to be a big focus with better permission controls. Android 11 will now automatically revoke permissions for apps you have not used in a long time. 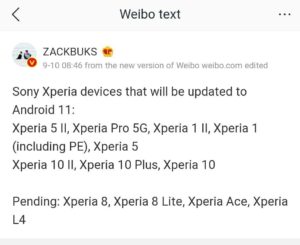 The post does not mention any timeline and there has been no official word from Sony yet.