Android is the most used and loved smartphone OS in the world. Most of the smartphones come with Android out of the box. Everyone loves Android because of its high customization options. It is not as smooth as iOS, but it is very easy to use, where on iOS it is quite difficult for a pure beginner to use the phone. Android is what the industry wanted, a technology that fits into all aspects, budget, flexibility, useability, and features. Google is now working on Android 11 to make it more secure and impressive. The Android 11 comes with AOD theme and color patterns, Dark Mode, Icon Customizations, Smooth fonts, and much more.

But, Tech geeks install other custom ROMs to test new features or themes which are generally not available on stock Android or stock UI provided by other OEMs. There are many custom ROMs available in the market. Lineage OS is one of the biggest names in the custom ROMs. While many of you might not know, this is the same ROM which started in the name CyanogenMod.

In the Fall of 2016, Cyanogen Inc. announced that they are closing this project and shutting their infrastructure. Since then the developers have kept the project alive but under a new name, Lineage OS. Now, they have the largest community of developers and this ROM officially supports over 190 devices. 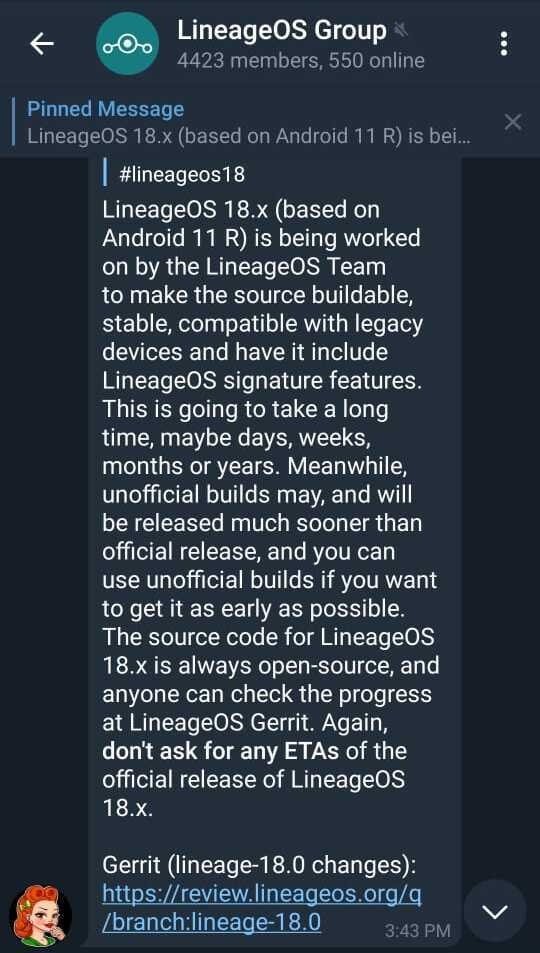 Lineage is now working on LineageOS 18, which will be based on Android 11. They announced on their Telegram group that, “LineageOS 18.x (based on Android 11 R) is being worked on by the LineageOS Team to make the source buildable, stable, compatible with legacy devices and have it include LineageOS signature features. This is going to take a long time, maybe days, weeks, months, or years. Meanwhile, unofficial builds may, and will be released much sooner than the official release, and you can use unofficial builds if you want to get it as early as possible. The source code for LineageOS 18.x is always open-source, and anyone can check the progress at LineageOS Gerrit. Again, don’t ask for any ETAs of the official release of LineageOS 18.x.

For now, they haven’t announced any release date but the ROM is expected to release soon. The last version of Lineage OS – Lineage OS 17 was based on Android 10. Lineage OS 17.1 offered all the Android 10 features such as system-wide Dark mode, Night Light, and Adaptive Brightness. In addition these, LineageOS 17.1 also offered few stylish gestures such as double-tap to wake, and double-tap to sleep.

Follow our website to get the notification of the latest technology updates as soon as we publish them.