The reveal of the 2021 season of Riot Games will take place this afternoon at 4 p.m., and we should have a lot of information on the future of Legends of Runeterra, but also of other games in the franchise. We allowed ourselves to make some speculations on the future region in addition!

The trailer for the 2021 season of all Riot Games games has been released, and we can see some teasers of what awaits us in the future on Legends of Runeterra! 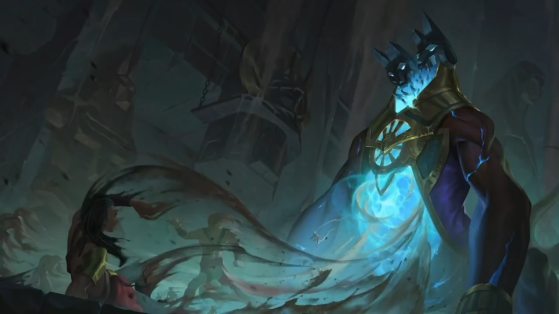 What we can see in the trailer for Legends of Runeterra

The conflict between Tresh, the Chain Guard from the Dark Isles, and lovers Lucian and Senna seems to come to a head, as the dark Tresh draws closer.
But that’s not all. Indeed, an image of the trailer briefly shows us the image below.

We see a two-headed creature. Sucking up what appears to be many human lives and / or sand. There are also large statues and a particular architecture that could make you think of the ruins of the region of Shurima.

Beware of speculation!
Warning ! None of this information is official, certified, or anything else. This speculation comes only from the image above, and from the hope of the editor (myself) who is very happy to discover a new region.

Nothing is certain, of course, but what can be said with confidence is that a new region should be unveiled very soon. This afternoon’s announcement would be the perfect time to unveil the next Legends of Runeterra expansion or, at least, the place it will highlight.
There are currently 4 (known) regions that are not yet implemented in the game. Shurima, Ixtal, The Void and Bantle. Barring a spectacular ending, it is bound to be one of those four, and based on the image we saw, Shurima seems like the more logical choice. The brevity of this hint doesn’t make it conclusive by any means, but if it did, one could imagine seeing some of League of Legends’ best-known champions coming to LoR.

Doom Eternal generated $454M revenue in 2020, according to SuperData

Microsoft Teams : How to create a Breakout Rooms ?

Microsoft Teams : How to create a Breakout Rooms ?