A new Mythic item is joining the cast for the League of Legends preseason.

For the past few days, we have been receiving a lot of updates on League of Legends patch 10.21 for the preseason from the League of Legends lead gameplay designer Mark “Scruffy” Yetter. We have already seen plenty of tweaks and tinkering that’s happening in the patch 10.21 this week about various Nerfs and Buffs received for various champions, Rune changes, Item changes, and the new Skins for champions like Pumpkin Prince Amumu, Bewitching Elise, Little Devil Fizz, Hextech Kassadin, Odyssey Aatrox, Odyssey Karma, Odyssey Kha’zix, Odyssey Sivir, and Odyssey Twisted Fate. If you haven’t read our article on the patch notes 10.21 make sure you read that we have covered everything in that.

Well now let’s see what Mark Yetter had updated this time for LoL fans. Yesterday, Yetter had posted on his twitter page about the upcoming support Mythic items that we are going to receive in the update 10.21, adding another enchanter Mythic to the mix. So, that the Enchanters are now having one more toy to play with. And also some minor tweaks are hitting the other three enchanter items, too.

The Imperial Mandate now would enable “ally aggression,” according to Mark Yetter. This item has 40 Ability Power, 200 health, 25 ability haste, and 100 percent base mana regeneration. And the Coordinated Fire will now deal with abilities which makes champions slow or immobilized  will give 80-140 bonus magic damage and also marks them for 4 seconds. Ally champion hitting a marked target will detonate that mark dealing with 80-140 bonus magic damage and granting you both a 30 percent movement speed for 2 seconds which is huge.

Moonstone Renewer has received a stat adjustment according to Yetter, while Shurelya’s Battlesong and Locket of the Iron Solari are now mostly unchanged “usable by tank and enchanter supports.”

More details on the Support Mythic changes are here. 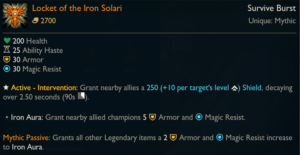