It seems like there’s been some mistake with Google or maybe they did it on purpose. A while ago, Wear OS 2.18 started rolling out to smartwatches. While that may seem pretty normal at first, things start to get confusing with the latest Wear OS update. Well, the latest Wear OS update comes with version 2.17. This update indeed downgrades the firmware as reported by a user. This update arrives after a week than the previous update. We don’t get to see any changes from the previous version. The question is did Google do it on purpose?

So, one feature that we get to see with the update is the option for variable brightness on AOD. This is a really useful feature. Many users with Wear OS smartwatches like Fossil are receiving the update. There’s still a catch to it. This auto-brightness feature works only with those 3100 compatible watch faces. These basically mean all those watch-faces that blink when a transition with AOD is done. Some reports also suggest that this variable brightness feature might not actually be a thing from this update and rather due to the H update. 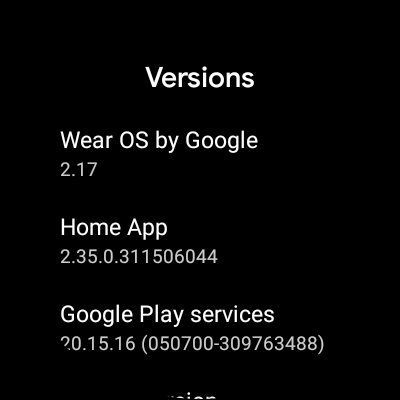 Other than this cool feature, some users are also facing issues with their devices. Some users are reporting their lock screen to start engaging while on their hands with the ambient mode on. This can be stopped after a quick restart. Users are still trying to figure out whether this a bug or a future. This also seems to occur when leaving the device on the charger for a while. Many users on the Fossil gen 5 Carlyle are reporting all this stuff.

As of now, things are not clear about what all Google is trying to do with the latest Wear OS update. We will only get to know more about in the near future. So people keep waiting until then.

Stay tuned for further updates on the latest Wear OS updates and more such related content. Also, share this article with all those people who have been wondering about these updates.