While you might have the same app experience regardless of the platform (whether it be iOS or Android) you are on, developers have to put in a lot of work to make that happen. While apps on different platforms might have a common UI and features, there can be differences like scrolling behaviour or a different navigation logic. Meanwhile, the application’s business logic, which includes features such as data management, analytics and authentication is often identical. So, therefore applications can have some parts that are common across platforms, while other parts are built differently for different platforms. 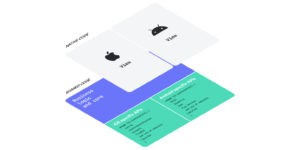 And this is where Kotlin Multiplatform Mobile (KKM) steps in. It is an SDK developed by JetBrains that allows developers to use the same business logic code for both iOS and Android applications. It uses the multiplatform capabilities of Kotlin and includes various tools and features that are designed to make the experience of building cross-platform mobile apps more efficient. With KKM, developers can use a single codebase for the business logic of iOS and Android apps. They can then write platform-specific code only where it is necessary: Such as the native UI or platform-specific APIs.

If you are a developer and like what you have been reading so far, you will be glad to know that KKM is now in Alpha. Being in Alpha means that developers can now use KKM to share a common logic code between different mobile platforms. Developers can create a new project or integrate a KKM module into an existing one. JetBrains, however, is not promising a smooth migration just yet. But since this is in Alpha, there should be plenty of fixes and improvements along the way, with the product evolving quickly.