Is Friday Night Funkin for Kids ?

Visually it has taken inspiration from early 2000s flash games and has even been credited with leading users to go back to Newgrounds, which was a site quite popular back in the early 2000s

Friday Night Funkin was created for the Ludum Dare 47 game jam in October 2020 but eventually found itself on Kickstarter to fund a full version of the game titled “Friday Night Funkin: The Full A** Game”, which has a set release date for sometime in early 2022.

What is the game about?

Friday Night Funkin is about a player character, named “Boyfriend”, who has to defeat a large roster of characters in singing and rapping battles so that he can date his love interest “Girlfriend”, you will have to mimic the opponents notes with timed inputs while trying to not run out of health throughout the duration of the song.

The game is on Windows, macOS, Linux and can be played on the Newgrounds website for free, we don’t know whether the game will become paid after its full release or not.

Is Friday Night Funkin for Kids?

Friday Night Funkin has been rated to be for children above the age of 13, but it comes down to a parent whether they are okay with their child watching content with mild amounts of swearing and some images which may come off as explicit but aren’t very inappropriate.

The game is targeted primarily at teenagers and above, so it is suggested not to allow children below the age of 13 to play the game and rather redirect them to a more friendly type of video game. 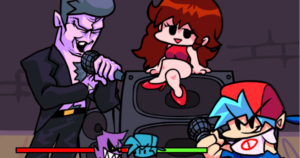