CEO Manu Kumar Jain has a posted a letter on Twitter

Some users and privacy activists have always had concerns about how secure MIUI is. But the recent banning of 59 Chinese apps by the Indian Government on the grounds of threat to the country’s “sovereignty and security” has brought these concerns to the mainstream. A lot of users and reviewers expressed disappointment when they found that some of the banned apps that came pre-installed in their new Xiaomi smartphone. Now more than ever, Chinese smartphone makers are going to face scrutiny about the apps they choose to load their smartphones with.

Improved privacy was one of the headlining features of MIUI 12. The Mi Browser got a button that let users opt-out of data collection. The privacy section got split into Stats and Manage. In Stats, users can view all the apps and the permissions they access. The Manage section includes a breakdown of the apps that have access to particular permissions. MIUI 12 also allows you to set up notifications for when an app accesses your location, camera, or microphone.

But in India, Xiaomi has drawn flak for pre-installing banned apps and their Security app. When you open the Security app, it asks you to agree to its Terms and Conditions. Once you hit agree, it has access to all your permissions. You never get to agree to these permissions individually. The Security app also has an in-built ‘Cleaner’ which needs permission to upload your file names to Clean Master’s servers in China (allegedly). Readers should remember that it has not been proven yet that the Cleaner sends your files to Chinese servers. Now Clean Master is an app by the infamous Cheetah Mobile, who got banned from the Play Store for malpractice. Clean Master is also included in the list of banned apps.

And today, Xiaomi India has finally decided to respond to this controversy. CEO Manu Kumar Jain posted a letter on Twitter addressing Mi Fans. The letter promises that a new version of MIUI is in development that will have none of the banned apps. This version will be rolled out in the coming weeks. The letter states that ‘Clean Master’ is a common industry name and Xiaomi does not use the Clean Master app banned by the Indian Government. It emphasises that 100% of the data collected from Indian users stays in servers located in India.

While this letter is reassuring, we will have to wait for the new MIUI version to see if Xiaomi can address all privacy concerns. 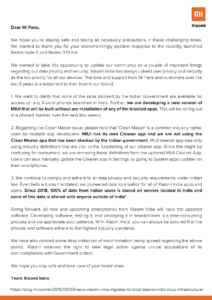 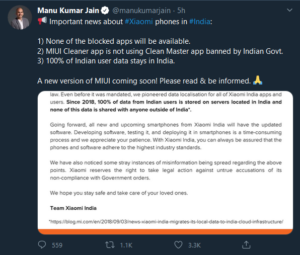