HTC is a Taiwan tech brand that was founded in 1997. The brand soon rose to popularity with its budget flagship devices, but nothing lasted for long. The sales of HTC dropped swiftly after 2015, just the way it rose. In 2018, HTC completely became inactive. Even the Instagram page of HTC was left unposted after 2018 and continues the same way. But HTC diversified its business by indulging in other product manufacturing like VR, mainly collaborating.

HTC continues to thrive as a decent and reputed company in its home market but globally, the brand is completely out of the race. But once again, here comes an HTC device to sight. So, here we are with all the details.

The tech geeks know that the Play listing is closely noted only for one main reason. It reveals almost every feature of the device which is yet to be released. Check out the image below which contains all the main specs of the Wildfire E Lite smartphone. 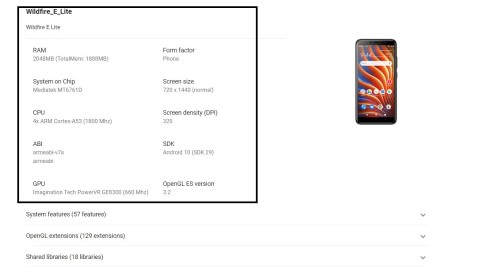 The very listing of the RAM conveys that the device will be an entry-level smartphone. This device will come with a minimal 2 GB RAM. The Wildfire E Lite will be powered by MediaTek Helio A20, one of the oldest and most affordable chipset.

Though we are unaware of the device dimensions, it has been revealed that the resolution of this device would be 720 x 1440 pixels. HTC Wildfire E Lite will boot on the latest Android 10 OS.

We will update this article when receiving further information, so stay tuned!