How to get H.I.V.E in Call of Duty: Mobile | Unlock HIVE operator skill in COD Mobile

Is there any way to unlock H.I.V.E right now?

Call of Duty: Mobile is one of the most popular mobiles game these days and engages millions of active users daily. Tencent Games developed the mobile version of the popular first-person shooter franchise. So far, the creators of Call of Duty: Mobile have successfully managed to engage the interest of the players. Regular in-game updates bring new game modes, new weapons, and a lot more new content.

The new season of Call of Duty: Mobile was launched last month. Season 3 brought a significant patch update to the game with a list of new content like new weapons, new weapon skins, new operators, new scorestreak, and one of the most exciting contents – new operator skills.

H.I.V.E – Use a Hive gun to launch a trap of proximity mines. When triggered, the mines will release a swarm of nano drones that kill nearby enemies.

As we expected and mentioned in our earlier season 3 CODM post, the new operator skill – HIVE finally made its way to the mobile version of Call of Duty. Hive or named as H.I.V.E is currently available in the game, but the status of the operator skill is unlocked.

A lot of players have been asking how to get HIVE in Call of Duty: Mobile, as the status says, “Stay Tuned.” You will find many articles and youtube video which claims to unlock the HIVE in CODM by a method. Well, let us tell you all these posts are nothing but click baits. 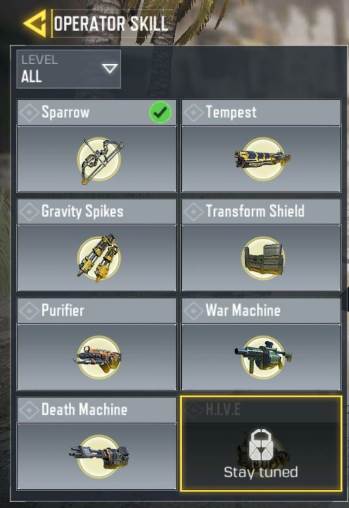 So, players can experience the new operator skill even if they do not get a chance to complete the operator skill special event. Well, talking about the event, for now, the developers haven’t mentioned the arrival of any such event, but we are expecting the HIVE event to arrive next week. And it’s obvious that Activision won’t push the release of new operator skill to the next season.

HIVE event may arrive next week, but again, it’s not an official announcement, but, we will keep you updated with the latest news. Activision may announce the arrival in the official blog this weekend. So, stay tuned.

It looks HIVE is finally here. Through the in-game announcement, the developers made it official that the new operator skill – HIVE will be available in the game on March 1.

Well, on March 1, season 3 will be ending, and as we mentioned earlier in this post, HIVE will be available with Call of Duty: Mobile Season 4 update.

The arrival of the HIVE at the starting of season 4 also means that the developers will not bring any new operator-skill in this season. Well, they might announce one but will bring it at the season end.

Also, we have covered some Call of Duty: Mobile Season 4 leaks in our previous posts. Make sure to check them out, links are mentioned below.

The HIVE event is live now. You can now unlock the all-new operator-skill by completing the tasks in the HIVE event.

Players can check out the event and tasks to be done in the announcement section. You can easily unlock the operator-skill by collecting 100 points.

Let us know your thoughts about the new HIVE in the comments section below.