GrandChase game : How to delete a character ?

GrandChase was a fairly popular anime massively multiplayer online game or MMO for short which had a two-dimensional side-scrolling game art style, it initially had a Korean release in 2003 and after its major success, it expanded to different countries in Asia, America, and Europe.

The game was developed by a Korean game studio KOG Studio and the plot revolved around the “Grand Chase” a group of heroes who departed their home with the goal of chasing down an evil queen, who wished to use her powers to start a civil war within the game kingdoms.

The character roster for the game began with only 3 players but many were added in the updates throughout the years. The final version of grand chase included 20 different characters all unique from each other.

However, GrandChase shut down all its servers and stopped its development in 2015, the studio began working on other projects however a spin-off was made for mobile, Grand Chase: Dimensional Chaser which borrowed characters from the roster of the original game.

GrandChase wasn’t just simply a game to many players, it been regarded to be one of the most important releases for the fans in the MMO community, and when the news broke out that the game will be making a return on PC platforms under the title “GrandChase Classic” fans were overwhelmed with joy and the nostalgia behind the game began to kick in.

GrandChase classic met its global release on July 28th, 2021, and is set to have 20 unique playable characters.

The game gives you four character slots and you can choose any character available to fill the slot, however, to get more characters you will need more slots that can only be bought.

It currently allows you to select your first character from a pool of 5 including Elesis, Lire, Arme, and Lass 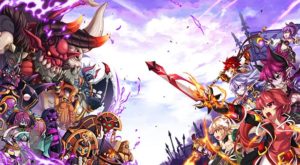 How do I delete my character?

If you’re one of the many people who wish to change their character in one of the slots you get at the beginning of the game because you had a change of heart or maybe the character you chose isn’t as fun as you thought then, unfortunately, it hurts to tell you that deleting a character from a slot isn’t possible, the game allows you and to a certain degree wants you to purchase more slots so you can get and use more characters.

If you still haven’t started the game then take our advice and only select one character, leave the other three slots empty and take time on deciding which character to add to them or wait for when they add more characters and then decide.

Yuzu Emulator WerFault.exe Application Error : How to fix it?