RidZak thinks that he is better than the legend Whitty and picks up a rap battle with Boyfriend. Everything is heated here! Read our blog to know more about the Friday Night Funkin V.S. RidZak Full Week mod update 1.2. 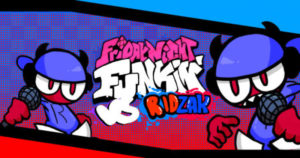 Friday Night Funkin is a flash rhythm game developed by Canadian programmer Cameron Taylor also known as Ninja Muffin 99 in OpenFL. It is inspired by Dance Revolution, Rock band, PaRappa the rapper, and many of the New ground and Flash cultures.

RidZak, the red-headed little monster who lives in the ClubCity. RidZak hears about the hot-headed rock star, Whitty being defeated by Boyfriend. He puts his cap on and sets his way to find Boyfriend and destroy him in a rap battle. He wants to prove to the city that he is better than Whitmore. (Whitty)

The developer of this mod has said that this mod is in no way a disrespect to the Whitty mod or its developers. It has been made just to add a little heat and challenge to the game.

Interestingly, the creator of this mod has stated that RidZak was not made just for an FNF mod. He is a character from a game that is currently under development for 2 months. CybbrGhost and Mr.Cash.M are also two other characters that are also from the game and they will both have their individual weeks coming soon.

The developer has added an Easy and Normal mode in the game so the players can set the difficulty level according to their preference. Moreover, a song for the pause menu has also been added. Furthermore, a bunch of bugs has been fixed too. Furthermore, the developer has also stated that this is just the first version of this mod and will soon be releasing the second one with cutscenes and more songs.

Yba new update for March 2021 : Here’s everything you need to know