Week 7 has released officially on Newgrounds but the website is down and crashing. Read the full article for the details.

Friday Night Funkin’ is a singing battle-based game. In the game, the main character fights and wishes to defeat an array of characters in the game who gets stronger in each round. Each round features a new song. The main attraction of the game has been its soundtracks. The game had a total of 6 weeks before today. The fans waited many days for the New Week’s Release. But, the website on which it is released has crashed. Here is everything you need to know.

Friday Night Funkin’s officials already delayed the release of Week 7 and now when they have released it, it’s not even working. The Newgrounds Website is down due to a sudden rush of huge traffic. The fans who were waiting eagerly for the week’s release are disappointed about this.

Week 7 of FNF features Tankman. Tankman is a soldier who wears a helmet, uniform, gloves, and pants in black while his skin, visor, and vest are white. He is a Newgrounds official character and this update is also Newgrounds Exclusive. Tankman has witnessed a lot of fans separately, therefore, this Week’s update rises the number of fans who were trying to play Week 7 on Newgrounds’ Website. 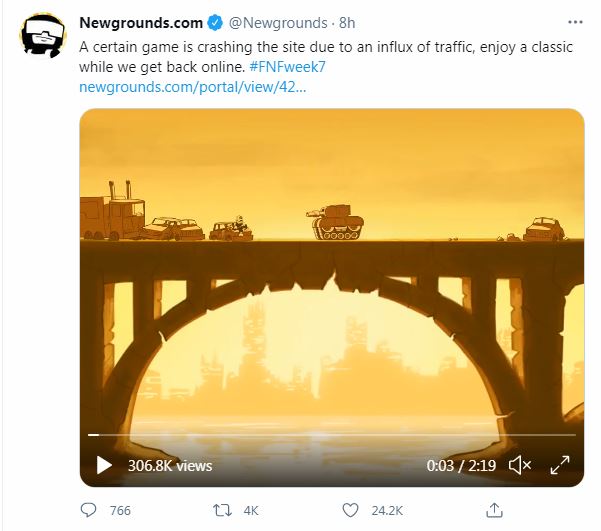 Newgrounds.com has already tweeted regarding this problem. They have mentioned that the site is crashing due to an influx of traffic. It means that the site has crashed because FNF fans reached to play this game in large quantity and it has lead to its crash. They have also assured the fans that the site will be back online pretty soon. So, you all will be able to play Week 7 of Friday Night Funkin’ as soon as Newgrounds’ Website gets fixed. You can easily visit here and check whether their Website is fixed or not.