Are you looking to step up your rap battle game? If yes, then this Duo Pack mod will offer you a completely new experience than what we have seen in the other mods of Friday Night Funk. The new update fixes the crash on thorns. Read our complete blog to find more about it.

This game is regarded as one the best rhythm games ever to exist to date. In fact, it offers you a wholesome experience of magnetic music, wavy beats, disruptive charts, and artistically created characters. This game is developed by Canadian programmer Cameron Taylor who is also known as Ninja Muffin 99. FNF revolves around the character “Boyfriend” who has to fight strange characters in a rap battle in order to get his girlfriend.

You need to pass multiple levels termed “Weeks”, where each week consists of 3 songs except the second week. You’ll have to pass 6 weeks and also the 7th week which will be released soon.

Furthermore, it is an open-source game that leaves a big room for people to who to show their coding and composing skills and drop creative mods in the game. One of such highly challenging mods is the Duo Pack Mod.

About the Duo Pack Mod 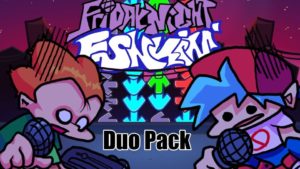 Earlier, the player had to mirror the notes sung by the opponent. But in the Duo Pack mod, the concept of taking turns is completely is eradicated. Thereby, meaning that the player and opponent always sing together. Also, here comes an interesting part. You’ll have the inverse notes of what your opponent might be singing. The crash on thorns is fixed in this new update which the users earlier complained about. Being one of the hardest mods available in the game, many skilled players too, feel a challenge playing this mod.  People are expecting a VS Whitty version of this duo mod, with what we believe might be surely on the developer’s mind.

You can download this mod directly from the official GameBanana site or click on the link given below.

After your download is complete you can extract the files and replace them with the original ones to enjoy this mod.

Credits of this Mod:

Credits of the game: