Outriders is all set to be released on 1st April, 2021. Many people loved it’s graphics and interface. The response received was very good, until the fans realized that the game is not having any in-game communication setup for voice chat. Building a game on this huge level and not providing the gamers one of the basic things of ‘Online Multiplayer Games’ (i.e. In-game chat with fellow players) seems to impact the image to the game.

How to use Voice Chat in Outriders CrossPlay?

Outriders Crossplay does not have it’s own game chat of any kind as of now, game fans were disappointed by this and raised questions about this. Square Enix replied that “We will not have in-game comms at launch and I can’t promise that it would be added down the line, but I can say that we are listening to feedback, weighing up the most requested features post-launch and seeing what might be feasible. Adding new features at any point of a game’s development is tricky (and feature creep is a risk to be avoided, especially for a new IP) and will always introduce bugs that need to be resolved while maintaining a high standard of quality. We are currently at a place in development where we are focusing entirely on balancing and bug resolving. To add features at this point would mean risking a delay to the entire product.” 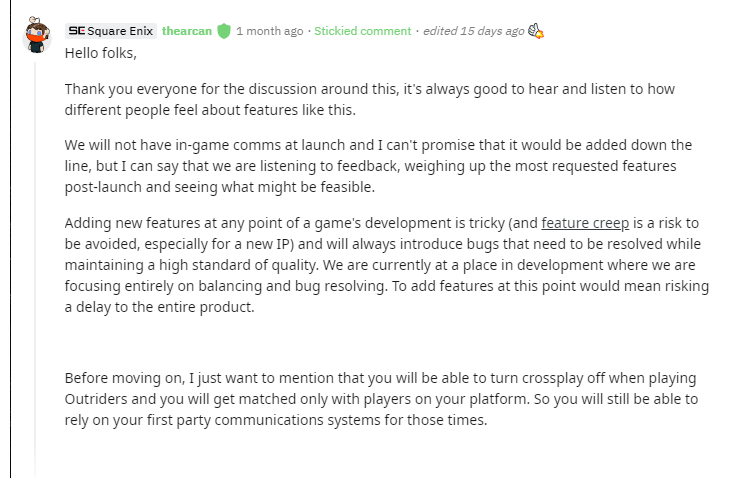 So, till now there are not any options of in-game voice chats, but players can definitely connect and communicate on various other platforms such as Discord, Xbox Party Chat and Skype. We can hope for this feature to be added in the game as this can prove to be a major drawback in Outriders’ success.

As Square Enix has promised that they will definitely listen to the feedback of the players, it can update this feature of voice chat in future updates of the game. Rather than this drawback of the game, it seems promising for its release and concern for managing bugs in the game.

UNO online multiplayer : Where & how to play it ?

UNO online multiplayer : Where & how to play it ?