Playground Games is gearing up for another impressive update on Forza Horizon 5 that many will definitely like. It has almost been a year since the arcade sim racing game came and swept fans off their feet. The wide roster of cars, customization, & tons of new content is what keeps us begging for more. Lately, there has been a lot of buzz in the Forza community about the upcoming Avalanche City DLC Map expansion. Every fan knows just how amazing the expansion can be and is a nice change from driving in the huge map of Mexico. Are you curious? Continue reading the article to know full details about the Forza Horizon 5 Avalanche City map DLC and when can you expect it to release. 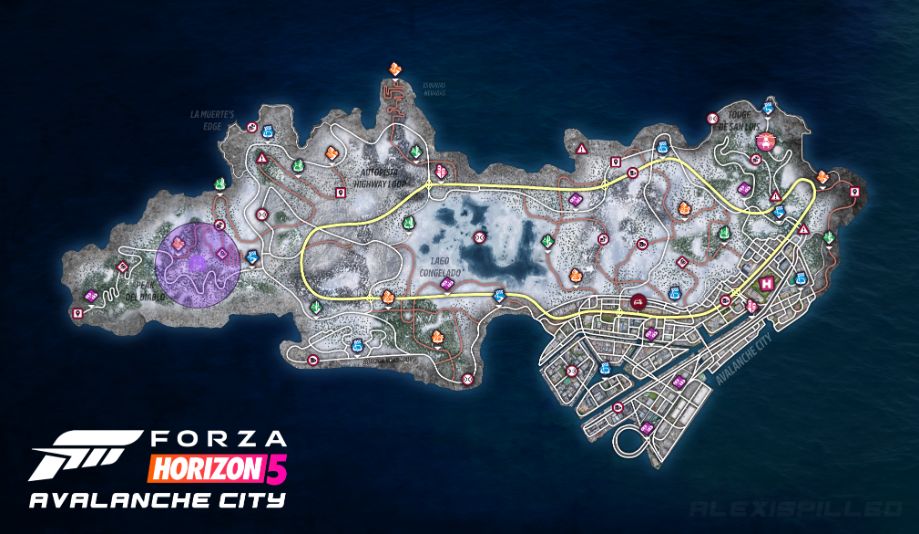 DLC Map expansion in Forza games is something every fan looks up to for many reasons. It gives a lot of replayability factor to the game and offers a fresh breath from regular races. The Avalanche City will most likely come as the second DLC of the game after Hot Wheels and it sounds more exciting. We and the community believe that the Avalanche City DLC might come out at the end of the year. What makes it more credible is that the DLC is actually confirmed and we’re bound to see it someday in the game. The concept art is very similar to Fortune Island on FH4, which was a major hit. One drawback of this DLC is that there won’t be a seamless transition to the area. It is very much like the HotWheels area in FH5 and we can’t wait to see it.

The second DLC will be more content-rich and has a higher chance of becoming a success. Players will teleport to the new location, and do races, custom events, and more. If the devs go with the usual route they take with the second DLC, they could add a new race type or new feature. The longtime fans of Forza can attest to this and we could see them doing this. They’ll most likely test the waters for the new event or PR stunt and will add it as well. Depending on the community’s reaction, they’ll give it the green light. If you’ll open the map, you can see a lot of empty areas in the mountains that would be very cool to explore. However, note that this is just speculation from our side, so make sure to take this information with a pinch of salt.

As for the release date of Avalanche City DLC Map, it is unknown at the moment. However, as soon as we get the official release date, we’ll update this article. We hope that you enjoyed reading this. Stay tuned for more updates about Forza Horizon 5 guides, news, and more at Digistatement.

Age of Empires Mobile Release Date: When is it coming out

Age of Empires Mobile Release Date: When is it coming out