It was also revealed that Fortnite Update 11.50 is coming in early February, and with the update, the game will move to a new game engine.

Epic Games missed some words in the announcement as a secret.

An official statement said: “Beginning with the release of the 11.50 update in early February, Fortnite will be moving to Unreal Engine’s Chaos physics engine. At launch, the goal is to ensure that Fortnite still feels like Fortnite. Along the way, there will be some bumps, so we’re starting tests with a small group of players.” 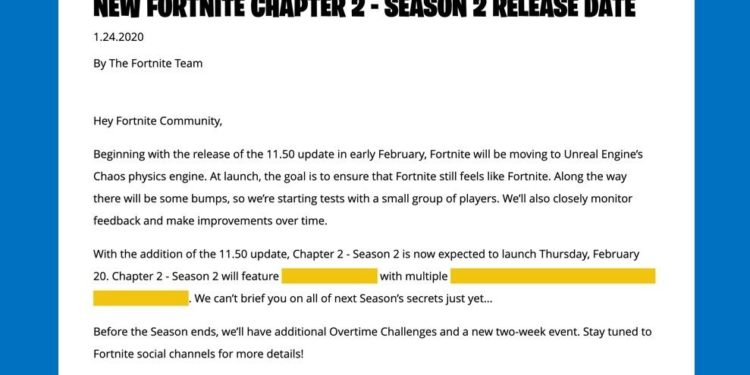 Before the season ends, the game will have additional Overtime challenges and a new two-week event.

Epic Games has yet to announce an update 11.50 release date. Maybe it teases some more about chapter 2 season 2. If something happens, we will be the first to tell you. So, stay tuned.

Pokemon Go players are not able to play with Buddy Pokemon properly after update 0.165.0

Pokemon Go players are not able to play with Buddy Pokemon properly after update 0.165.0