Ubisoft’s most compelling First Person Shooter, Far Cry series is well regarded for its compelling plot, great action sequences, its first-person gunplay, and its characters that leave a strong impression on players. Its latest game, Far Cry 6 keeps the classic formula of its predecessors and delivers deep gameplay with darker themes of power, corruption, and freedom.

Like the previous games, it also has plenty of firearms and explosives that have their own stats and each made for close quarters and long-range gunfights. If you’re new to the game and confused about which firearms to pick, we’ve put together a simple guide that’ll help you decide on which guns are the best in the game. Read on more to know about the game and our top 10 best weapons in Far Cry 6. 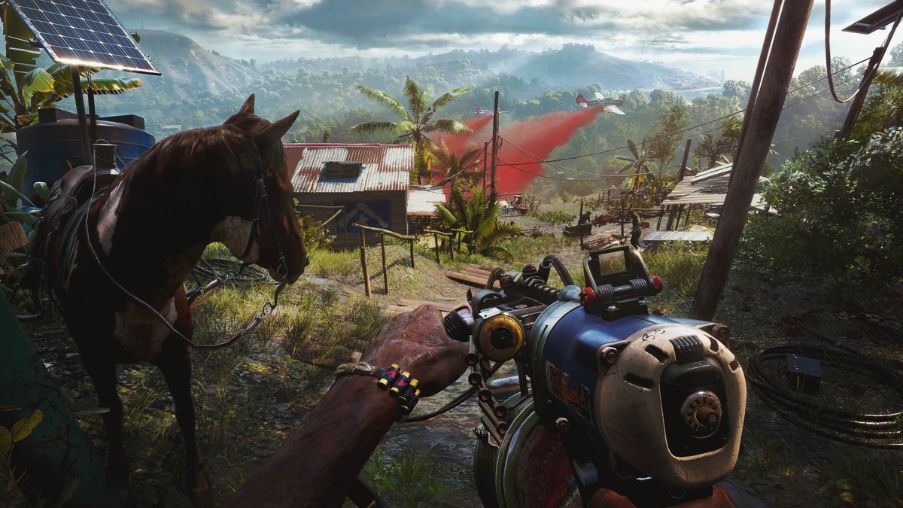 The setting of Far Cry 6 takes place in a fictional Caribbean island called Yara where a tyrannical dictator, Anton Castillo has taken over the country and killed everyone who opposes his rule and ideals. The player takes control of a rebel known as Dani Rojas, who unifies the freedom fighters of Yara to overthrow the corrupt regime and free the island from tyranny. To do that, you have to fight your way through the opposition, and picking the right weapons will get you the results.

In order to survive the harsh battlefield and plenty of resistance, we’ve compiled our top 10 weapons that’ll help you kill enemies in close-quarter or from a distance. Below is the list of the top 10 weapons in the game.

Impact Driver is one of the best light machineguns that boast higher firepower and can tear the enemies to shreds. You can find this weapon in the far east border of Valle De Oro and once you arrive in the area, you’ll see a compound with a smaller section to the right side which can be easily identified next to the green walls. Get inside the compound and climb on top of the building to reach the smaller closed-off section and there the impact driver will be waiting for you in one of the crates. 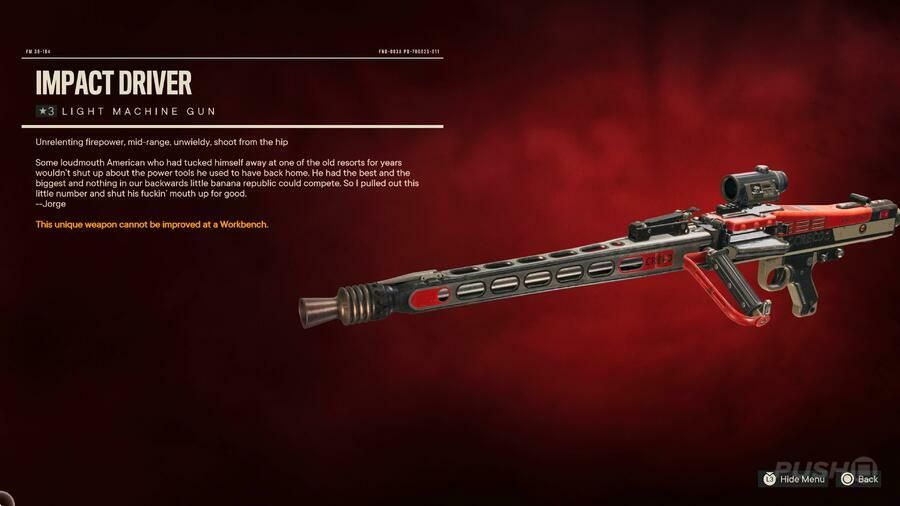 This variation of the SPAS-12 shotgun comes with a faster reload, buckshot, and suppressor and is good for dealing damage to enemies in close range. It can be found in an oil rig on the far northwest side of the map. Once you get there, you have to go to a small room and hit a switch to move a crate out of your way in order to acquire the weapon. The switch is located on the southwest quarter of the oil rig. Once you hit the switch, head southeast, and inside the crate be a supercharger shotgun stashed in a briefcase. 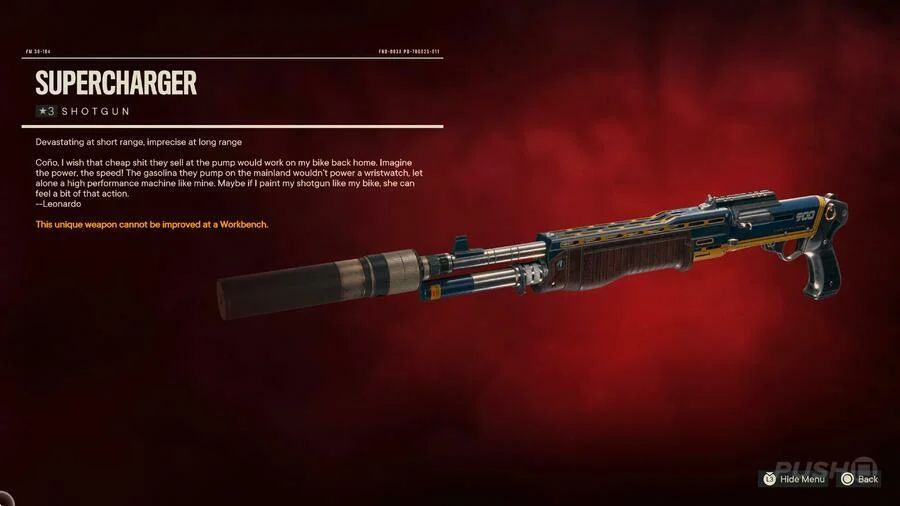 This grenade launcher is best for players who prefer to run and gun in their playthroughs. To get this, head over to the steel plant in the northwest Madrugada region. You will see some water towers there and if you cross over the train tracks, turn right to the side of the building and it’ll be available for you to grab in a small shed. 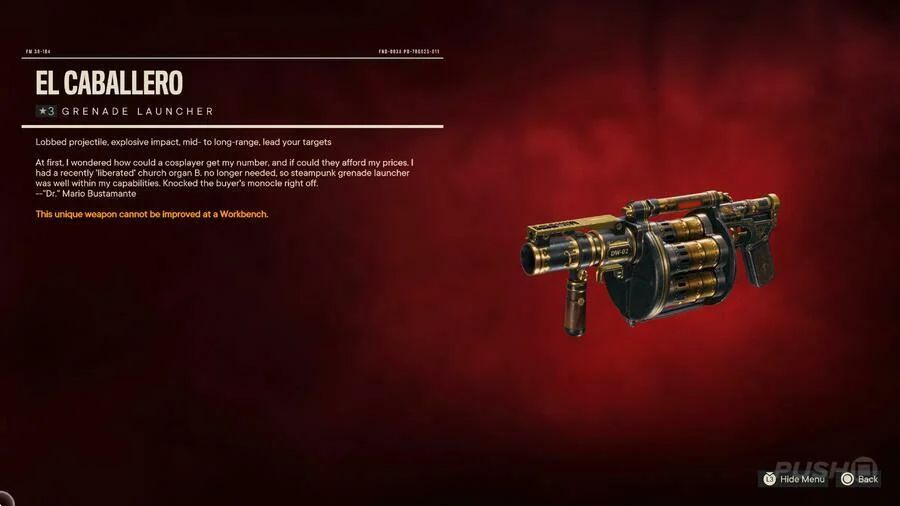 It is a resolver weapon that can be powerful depending on one’s playstyle. La Varita is located in the Oluwa cave which is to the east of Gran Guerrero Mogotes. The best part about this is that by picking up La Varita, you’ll get an animal companion called Oluso. To get this, head to the cave and it’ll offer you three treasure hunts to complete, all of them have Triada name under it.

To get this weapon, you have to locate three treasures.

The first treasure is located in Lozanía, Madrugada. All you need to do is follow the ropes and you’ll come across the relic.

The second treasure is in Cruz Del Salvador and players have to head inside a fortress to get a relic. Once you enter one of the rooms, every mirror will break, except for one. So, break its glass and you’ll find a switch that opens another room. You’ll notice three TVs and buttons. You will need to press the middle button, followed by the left and then the right button. This will open a piano on the second floor with a note, grab the key in that room and head downstairs and in the locked door, pass through the hallways until you come across a button. Head down, and grab the grappling hook to climb the ledge where the second Triada will be found.

The third and final treasure can be located right down the load in La Joya. Head down to the mining trench area and unplug the power from the generator that’s hidden underground. In the cave, grab the key card from a dead body in the first room on the left. After that, dive underwater, and on the left side, there will be a blue door with a button that turns off the poisonous gas. Wait for a minute or two and head to the drill site by grappling down. The third relic will be located under a tree in an open area. Collect it and then head back to Oluwa Cave. There, find the Triada marking and interact with it. After this, you’ll find Oluso, La Varita rifle, and the Triador supremo Backpack. 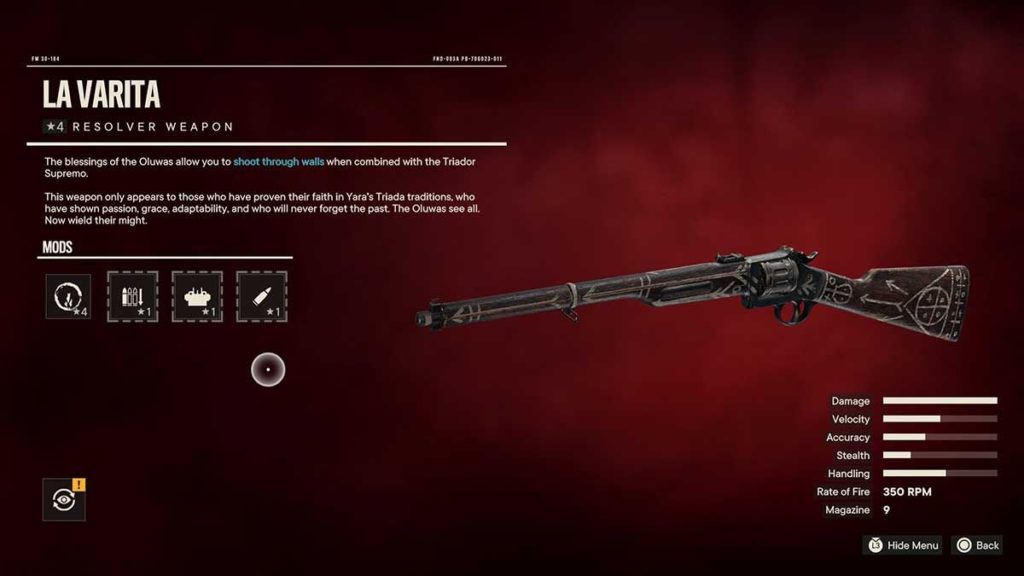 It is a mid-range rifle that deals high damage and requires precise aiming to land accurate shots. It can be found at Esperanza, southeast of the city on the docks where few enemies are present. Head over to the building towards the end of the dock and you’ll see a crocodile case where Urushi will be waiting for you to pick up. 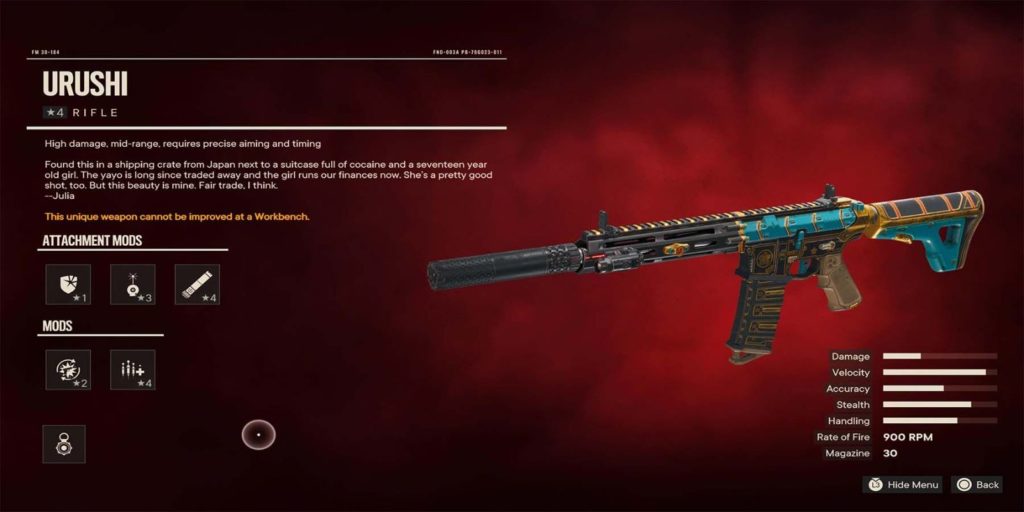 El Tirano is a .50cal sniper rifle that is perfect for killing enemies from a distance. It can be found at the tippy top east side of the map in Valle De Oro. You can grab it by grappling to the top of the lighthouse and it’ll be there. 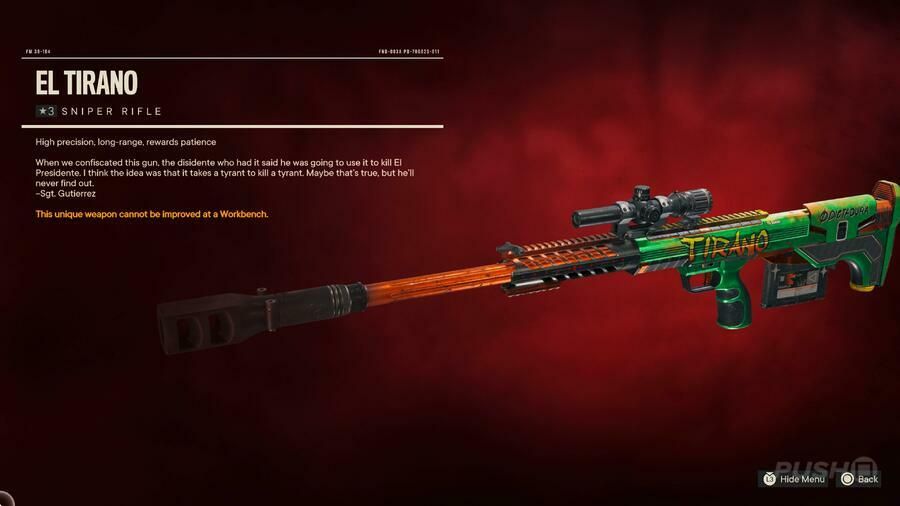 It is an SVD sniper rifle, that’s pretty powerful when it comes to landing headshots. Like El Tirano, it can also be found at Valle De Oro just outside of the military hideout. You’ll see a manhole where you can climb down to get to the sewers. The hideout is towards the jungle and it’ll have a red ladder. When you climb down, you’ll see this sniper rifle under the crocodile case. 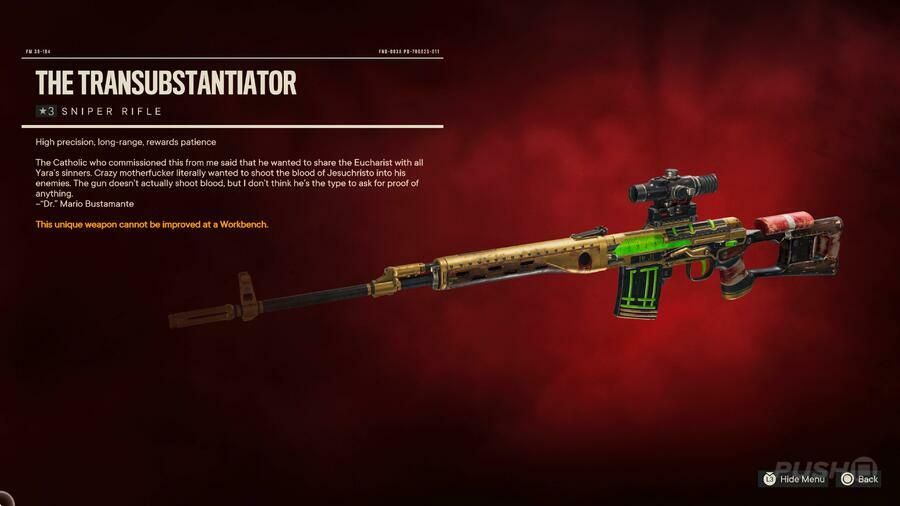 Desert eagle has a higher damage output and is one of the stronger handguns. It can be found in Esperanza, but you’ll have to complete the “last one to leave” treasure hunt by reading the note that’s in the red switch box in the power generator and then look for three wires that lead to different locations. Trigger the first switch by jumping to the blue water drum tower and then head to the blue house next to it, which is being poisoned by the gas. You can fix it by shooting the huge yellow gas tank.

Enter that building and hit the switch inside again, and finally, enter another blue house and click the radio, TV, and picture frame in order to open that door to open the bookshelf and reveal a hidden area where you’ll find the last switch. Head back to the area where you received the note and enter the locked room on the side of the building and you’ll get the Desert Eagle in the red chest box. 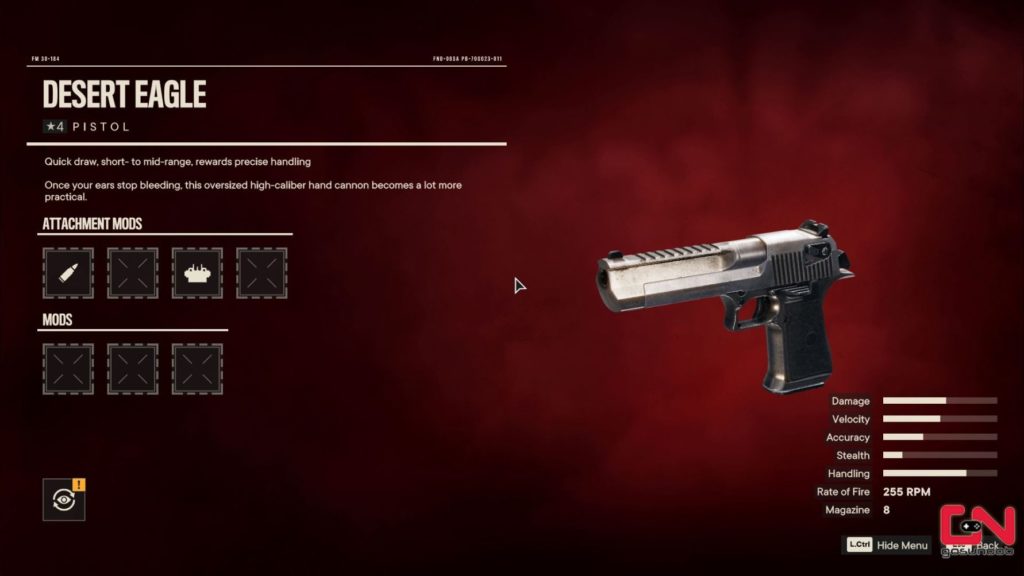 The final weapon that we’ll recommend to you is the SKS that’s useful for firing mid-range and long-range shots. Combine it with armor-piercing rounds and you’ll be able to one-shot anyone easily. 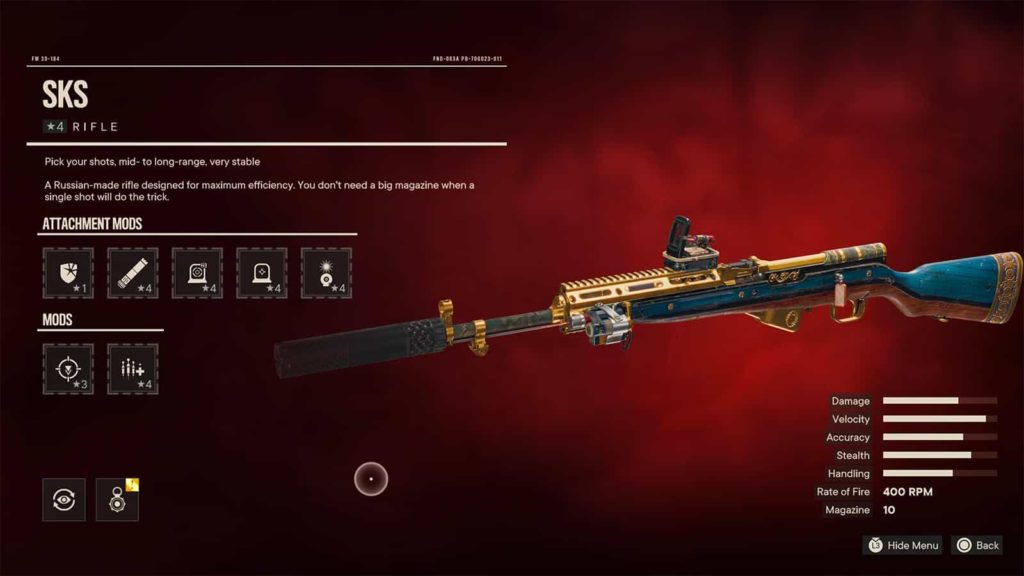