Bethesda announces what awaits you this year in the online role-playing game Fallout 76. This includes seasons, balancing adjustments and the start of a new story about the Brotherhood of Steel.

After the Wastelanders update, Bethesda is already working on additional content for the online role-playing game Fallout 76 and has now announced the plans in a roadmap. 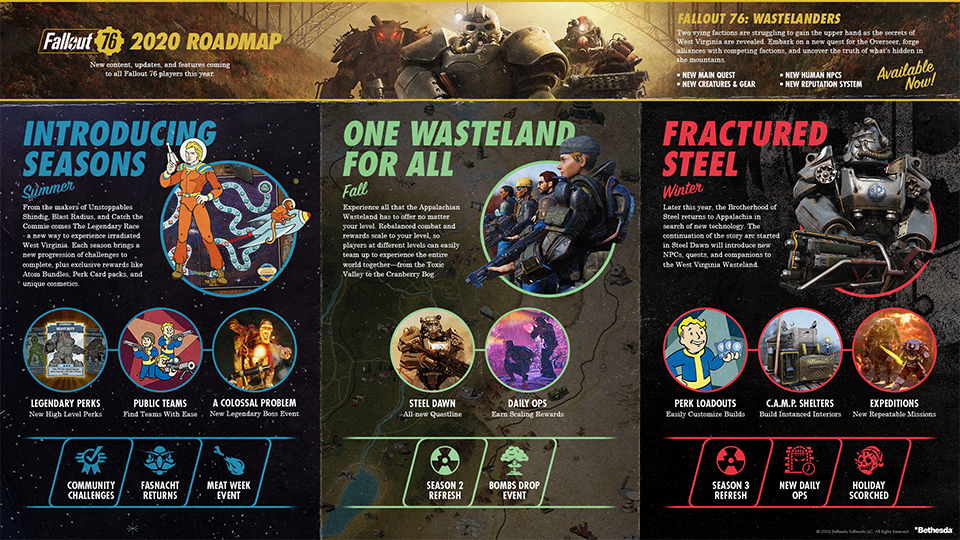 Innovations in 2020 include the introduction of the seasons, major balancing changes to the battles and rewards for players of all levels, CAMP hideaways, legendary skills and the start of a new storyline about the Brotherhood of Steel that accompanies you throughout the year.

Bethesda presented the seasons in more detail. This is a new, account-linked system, which gives you new rewards such as power armour paintwork, CAMP items and atoms, as well as legendary certificates and skill packages. Each player can take part in the seasons.

The seasons are basically a revision of the current challenge system. You now get so-called SCORE points. These drive your seasonal progress. However, the entire system is still under development and players can use their feedback to influence what will change. This is how the season should go:

The seasons in Fallout 76 start with Patch 20, which is planned for this summer. Four seasons per year are planned, each lasting around ten weeks. If you want to try Fallout 76 times, you can currently play the online role-playing game for free as part of a FreePlay event until May 18.