EMUI 11 to release in July-September

Huawei is a Chinese tech brand popular for the fantastic appearance and unique custom OS of smartphones. Huawei was banned from using Android OS and Android apps last year (2019). But Huawei has been using the open-source Android framework via the brand’s custom OS- EMUI. The latest version of EMUI is the EMUI 10 which is soon going to see a successor.

One of the moderators just confirmed a piece of huge news about EMUI’s upcoming version. The news is through a Chinese social media platform, Weibo. Check the details below.

Yes, you read that right! EMUI 11 is finally going to release with some of the latest features and advanced interface. The news was revealed by the account that goes by the name “Digital Mad Report”. The account holder is known for being one of the moderators of Huawei. The post read in Chinese whose translated image is attached below. 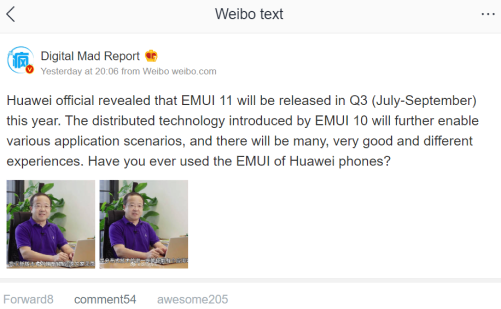 It is also clearly mentioned that EMUI 11 will release from July to September, which is the Q3 phase of 2020. The question asked whom all have used EMUI of Huawei phones also gathered a lot of comments in a very short time. As most of them replied with a yes and what they expect, the rest of them commented on how EMUI 11 might convince them to shift to Huawei smartphones.

Dark mode and gesture enhancements are the most awaited optimizations from the users’ end. Android 11 has brought several features related to these two features in the very developer builds. Users are already enjoying every bit of optimizations that are revealed online. So, EMUI 11 is creating the same hype about easy gesture uses.

Other features include print-to-print, always-on display, and more. You can read the below articles to learn more about Huawei’s EMUI 11 and the features.