Another work from Hiro Mashima the mangaka, Edens Zero, is getting an anime series. Will it be as good as Fairy Tail and Rave Master?

A few days ago through the official Twitter of Hiro Mashima (creator of Fairy Tail), a great announcement was revealed for fans of this mangaka, and that is that his manga Edens Zero will soon have an anime adaptation.

EDENS ZERO is getting an anime release!
Stay tuned for incoming updates! pic.twitter.com/WI1KQ8ZbDn

Shiki Granbell is a robot-raised orphan on Granbell, a desert planet that was once a huge theme park, he meets and befriends Rebecca and her cat Happy when they both visit the park to record content and post it on their website. videos called “Aoneko Channel”. During their visit to Granbell, Rebecca and Happy are kidnapped by the resident robots of the theme park, which is later revealed to be a ruse to make Shiki leave the planet alongside Rebecca and Happy as all of the residents were about to go out. Shiki rescues them and together they escape from the planet to explore infinite space in addition to fulfilling their goal of winning many friends along the way.

Interestingly, Happy in Edens Zero looks strikingly similar to the ones in Fairy Tail. Could it be the same Happy? If so, it’d mean that Fairy Tail and Edens Zero were in the same universe. Mashima also asked for fans to stay tuned for further info regarding the release of the anime. 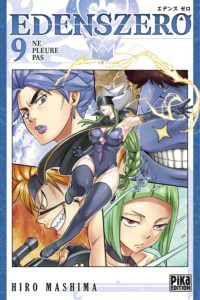 Shonen pure and hard, this manga has benefited from a simultaneous launch in the new world. The arrival of an anime adaptation is therefore not really surprising; it is even possible that it was included in the deal from the start.

Currently, there is no date set. It will be a while for some solid news from the creators.