VP.Prodigy, Team Secret and OG received invitations to OGA Dota PIT Season 3 for Europe and the CIS. Information about this appeared on the official website of the organizers of the OGA Dota PIT.

VP.Prodigy, Team Secret, OG, Team Liquid, Alliance and Nigma will start their performance at the tournament from the main stage. FlyToMoon, 5men, ViKin.gg and Ninjas in Pajamas will fight in a closed qualifier, from where the two strongest squads will advance to the next stage of the tournament.

According to information from VP.Prodigy’s announcement, in the first match the team of Vitaly Save- Melnik will meet with the team of Clement Puppey Ivanov. The confrontation is scheduled for September 23. 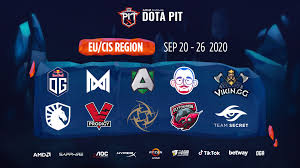 The first place will receive $ 70,873, the second $ 36,822, and the third $ 19,822.  The reason for this particular division was not mentioned in the announcement of the tournament by the organizers.  Will any team be able to put a dent to Team Secret’s perfect season? Currently Team Secret has become the most dominant team in the history of Dota 2. With a winrate of above 80% they have won 7 straight titles and did not even lose any series last tournament.

OG especially left Omega League with a sore spot and must be gearing up for a revenge takedown. We must also not rule out Nigma as they can beat any team on their good day as well (except OG haha). That is it for today.