Patch 7.28 for Dota 2 almost killed Outworld Destroyer – his winrate dropped to almost 30% (the worst indicator among all heroes). However, the 7.28b update radically changed the situation: Valve significantly strengthened the character, and Outworld Destroyer immediately became a frequent guest in matchmaking. However, on high MMR, the hero began to be actively taken not only on the mid lane, but also on the hard lane – to the third or fourth position. Currently, Outworld Destroyer is among the top 30 most popular heroes among professional players. Most of this character is trained by David Moo Hull of the Sadboys , and we will analyze the potential of Outworld Destroyer in his games.

Prior to patch 7.28b, Outworld Destroyer’s pickrate was just over 1%. The very next day after the update, this indicator increased to 4-9% (depending on the rank), and the hero’s winrate also increased by almost 5%. Since the release of the patch, Moo has played 21 matches at OD – 15 of them ended in victory for the American esportsman.

Outworld Destroyer is great in both offlane positions. As a “four”, he can successfully drag around the map and control the runes due to his high speed. At the same time, on the lane, he is effectively exchanged with the enemy support thanks to the first ability. However, Moo showed that the hero realizes his maximum potential precisely in the third position due to his high tempo. He confidently stands on the lane – farms without problems and has the ability to kill enemy heroes, after which he quickly takes out the first items and immediately connects to the team. One Meteor Hammer bought in the tenth minute is enough to start crushing your opponent. In midgame, having a good network, Outworld Destroyer deals a lot of damage and penetrates opponents with a high level of armor. 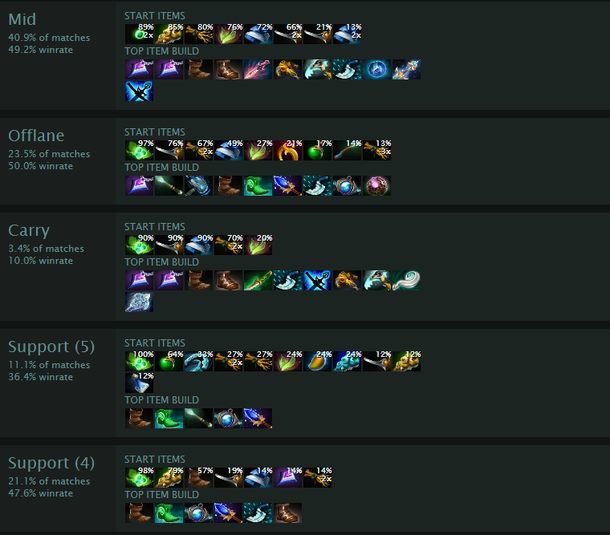 The initial purchase from most pro players is identical : six Tangos, two Iron Branch, Mantle of Intelligence, and Circlet. Sometimes “fours” at the start took Boots of Speed ​​and three Tangos, but not all of them, since Outworld Destroyer has a high base speed – 325. Most players on the “three”, like Moo, were in no hurry to buy a boot until the ninth tenth minute.

First of all, the hardlaners collected Null Talisman and Magic Wand, after which they took Ring of Health and Ring of Regen. Thanks to two abilities that help to finish off enemy creeps without any problems, by the eighth minute Moo brought himself a ready-made Meteor Hammer and only after that he would finish building Tranquil Boots. Having a high rate of mobility and regeneration due to items, Outworld Destroyer began to move around the entire map by the tenth minute.

The early Meteor Hammer allowed Moo not only to actively cooperate with the team and push lanes, but also to kill enemy supports alone. Two or three hits with Arcane Orb, followed by Astral, after which Hammer continues to stun and a couple more hits with the first ability – often enough to deal with the opponent. However, in order for the combo to work for sure, you need to correctly time the item to be used while the enemy is in Astral. A reddit user showed an easy way to get your bearings: press the Meteor Hammer when the Astral bar reaches the “h” in the word “Banished”. Thanks to this, you will not allow your opponent to use abilities and items and continue to stun.

The skill leveling of most players on Outworld Destroyer was the same. At the first level, Arcane Orb is taken, at the second – Essence Flux, at the third – Astral Imprisonment, after which the improvement of the named second spell continues. Ultimate is learned at the sixth level. Next, the passive is brought to the maximum, and only then – the first ability.

About talents, opinions of Moo and, for example, iceiceice differed: the first takes +200 health at the tenth level, and the second prefers +15 attack speed. Further, both esportsmen choose +30 movement speed. At level 20, the opinions of the players diverge again, but Moo is more likely to choose the left talent. At level 25, the Third Position Outworld Destroyer favors + 2% Arcane Orb Damage.

Moo has been playing the lane quite aggressively since the second level. He constantly attacked enemy heroes with his first ability. Every time he was in a lane with an active “four” that had offensive spells, Moo did not hesitate to constantly exchange health or even dive under the tower. At the same time, he almost did not sink in resources: quickly purchased rings gave high health regeneration, and mana was always enough due to a passive ability (Moo almost never carried Clarity or Mango for himself).

With the receipt of the ultimate, Moo almost immediately implemented it even into the enemy “five”, forcing the carry to go into the forest. Since by the seventh or eighth minute he had Meteor Hammer ready, by the tenth minute he was demolishing the opponent’s tower, after which he immediately moved to the top line or to the center and continued to put pressure on enemy buildings.

Moo practically did not leave to farm in the forest, but tried to speed up the pace of the game and impose early fights on opponents, in which his hero made a lot of damage. Infinite mana and high health regeneration allowed the Outworld Destroyer after a minute of battle to have full resources and the ability to convert the kills made into demolished buildings.

How do you like Outworld Destroyer after 7.28b patch? In what position do you find it most useful?

Fix HBO Max not installing/showing on Samsung TV in 2021

Fix HBO Max not installing/showing on Samsung TV in 2021