Last night, Valve sneakily pushed in Patch 7.26 for Dota 2 and it is definitely going to slow down the game. Icefrog and Gabe want to bring major changes at the competitive level of the game even during the coronavirus pandemic. The patch is not extensive rather it only has 3 new changes but they will majorly alter the game, especially at the top level.

HUGE CHANGE! This instantly brings down stat heavy items from the table. Movement speed might not look like a big deal but items like butterfly that almost became a must on Terrorblade because of the MS it provided becomes obsolete. The bigger thing is Strength that gave out magic resistance so people could get away with buying 2 heart of tarrasque and eye of skadi. Spell amp on intelligence heroes was also very important now a lot of standard builds have to be redrawn to accompany the changes.

The meta right now is picking deathball heroes that suddenly are pushing your tier 3 towers 25 mins into the game. Heroes like Lycan, Pugna and Nature’s Prophet are hit hard as their timings will be pushed back a lot. This will definitely slow down the game meaning fast-paced lineups will have a tougher task ahead of them. Hard Carries will shine this patch, we think. Note: It is all bounties that are reduced.

Dota 2 patch 7.25 increased the kill streak bonus quite a bit and it led to some wonky overpowered gold gains in the game. Suddenly you can have a 4 slotted bounty hunter running around killing your supports in 2 hits because he got a killing spree in the early game. Now the Killing bonus is even lesser than 7.25 and this will surely slow the game down. 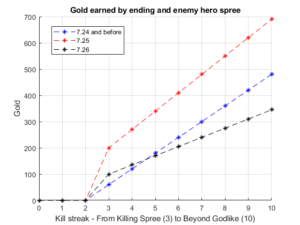 We can’t wait to see the hero changes and pro players adjusting to the games. Have fun with 7.26 till then!