Valve shared new details on the Regional Major Rankings CS: GO tournaments. The company told how many championships it plans to hold and announced the prize pool of rating points. These points will determine which teams will receive the slots on the ESL One Rio 2020 Major. Information was published on the official shooter blog page.

The Valve table indicates that the participants of the last major – StarLadder Berlin Major 2019 – received from 300 to 800 points depending on the place they occupied in the championship. For each subsequent competition in the Regional Major Rankings series, the prize pool of rating points will increase. For the championship in the spring tournament, the team will earn 1,600 points, and in the autumn – 2,500 points. Earlier, two series championships were announced, however, the summer competition is also present in the Valve table. 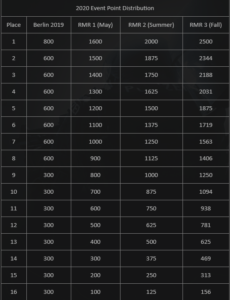 Valve also clarified how penalties would apply to teams in the event of a change in the roster. As mentioned earlier, the departure of each team member robs the club of 20% of all points. If a team makes two substitutions and in this composition is registered for the next tournament of the series, then it loses 40% of the points earned. During the tournament, teams can change the player for a coach – for this, the team will lose 20% of the points received in the championship. 24 teams will be invited to the Major from six different regions based on their Regional Major Ranking.

In total, there are 8 Legend, 8 Challenger, and 8 Contender invitations available.

Each region will be allocated invites to the Major based on that region’s performance in the preceding Major.

April 2, it became known that the participants of ESL One Rio 2020 will be determined in a series of regional qualifiers.

Take Virtus.pro. In the previous major, the team played in the playoffs, which means they will receive an initial bonus to points at the first RMR tournament. From April 30 to May 17, the team will perform at ESL One: Road to Rio with all the tops of the CIS.

Based on the results of this competition, they will form a rating of the teams according to the points scored (I recall, the metric is still unknown). Depending on the location, VP will either receive a slot in the next RMR tournament, or she will have to play qualifiers. After all RMR tournaments, according to the summary table, it will become known which teams from the CIS will receive invitations to the Brazilian major: two to the group stage, three to the preliminary stage.